‘EastEnders’ Spoilers: Who Will Die During Disaster Week – Nearly A Dozen Characters Involved In Bus Crash 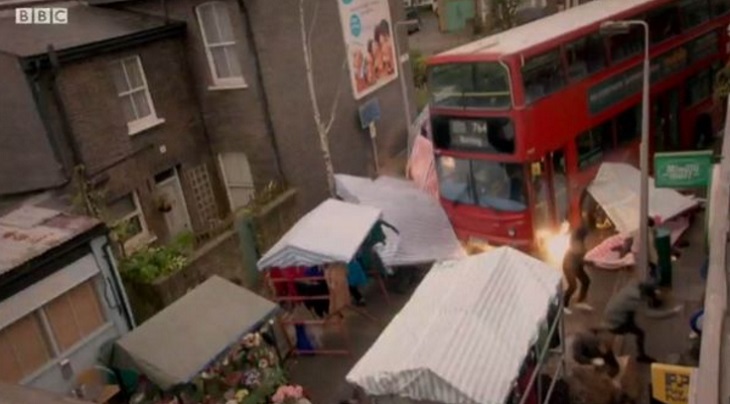 EastEnders spoilers have been teasing a bus crash in Walford for weeks, but no one was prepared for the horror that went down tonight on the BBC1 soap opera.  A bus driver appeared to have a heart attack while driving a city bus through town – and he plowed through the market and crashed in to the bridge.

EastEnders spoilers indicate that there could be more than one fatality as a result of the disastrous bus crash – not only are the lives of the passengers at risk, but also the pedestrians at the market.

As of right now the count of EastEnders cast members involved in the accident is up to 11, but that doesn’t mean that more victims won’t be unveiled as the week progresses.

Last week Tilly Keeper gave a few interviews about the upcoming crash and teased that some lives would be changed forever – so we have suspicions that we may lose a member of Walford’s younger crowd.  Rumors of Bex Fowler leaving town have been floating around.

We don’t see EastEnders killing off Denise Fox right now, seeing as how she has some major baby drama to sort out with Phil Mitchell.  We would like to think that Honey is safe, the Mitchell Family can’t handle any more tragedy this month.

What do you think EastEnders fans?  What characters will and won’t survive the tragic accident?  Share your thoughts in the comments below and don’t forget to check Soap Opera Spy for more EastEnders spoilers and news.

WATCH: ‘The Bold and The Beautiful’ Preview Video Tuesday, January 24