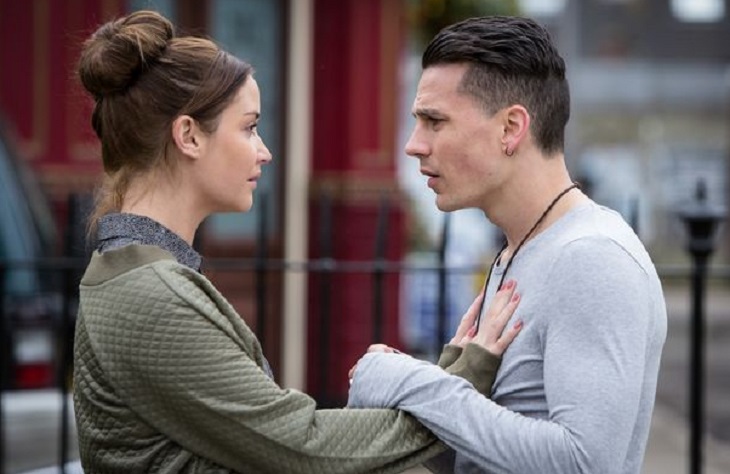 After Steven Beale’s (Aaron Sidewell) dramatic lies and meltdown on EastEnders we didn’t know that he could go any further in his quest to keep his girlfriend Lauren Branning (Jacqueline Jossa) in Walford. EastEnders spoilers indicate that his latest in what seems to be a long plot is that he wants to adopt her son Louie. He is not the biological father of the child but he has been around for most of his life.

But after telling Lauren that he has developed a brain tumour how can she say no? We have seen Lauren overcome with guilt since last week when he told her the fake news.

EastEnders spoilers revealed earlier that Lauren was planning on leaving the Square all together and starting a romance with Josh! But Steven’s lies have kept her put through guilt. Guilt which Steven is playing off every single day as he has seen Lauren fall for his lies.

But he is set to take it a step further this week as he will ask to adopt her son, and after that he will propose to her in front of everyone in the pub.

Ridden with guilt how can Lauren say no, she thinks he is dying. Lauren will be an emotional mess this week dealing with the news and she will push Steven to tell others about his brain tumour, specifically the Beale’s, his family. Which means his lie is spreading further and he is digging himself a bigger hole day by day. Surely someone will notice that he is not actually suffering from a tumour and his dirty secrets will be revealed.

Mick Betrayed By Linda – What Secret Has She Been Hiding?

But, EastEnders spoilers tease that it will not beeasy sailing for Steven, Lauren is clearly hesitant to both the proposal and the adoption request. When he goes behind her back and arranges a meeting with a solicitor she is shocked but due to his illness she doesn’t confront him. What will Lauren do, follow her heart and leave the square? Or stay with Steven due to guilt?

Check back with Soap Opera Spy for more EastEnders spoilers and news here.