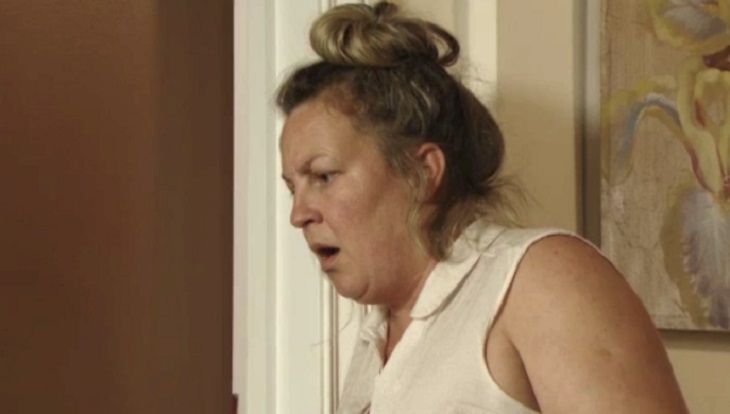 Fans are furious that “EastEnders,” has teased a possiblet storyline between sister and brother Bernadette (Clair Norris), and Keanu (Danny Walters) Taylor. The family is new to Walford and with mom Karen (Lorraine Stanley) at the helm they immediately made a striking impression on their neighbors. But would the BBC One soap really go so far as to feature a pregnancy between Bernadette and Keanu?

The loud and proud Taylor family arrived to town with a bang. Karen made no friends when she punched Sharon (Letitia Dean) in the face, and later it was revealed that she is actually Keegan Baker’s (Zack Morris) mother.

Last week viewers saw the savvy mom figure out that 15-year old Bernadette was pregnant, a secret that the young woman had been hoping to keep. After refusing to eat her favorite snack, the mom deduced that something was up and confronted her daughter by demanding to know how many weeks pregnant she is. Bernadette did not want to discuss her life with Karen, but the persistent mom eventually learned some rather startling details.

In a later episode Karen listened at the door as her kids discussed the pregnancy. What left viewers shocked is that the conversation could have easily been misconstrued to make it sound as if Keanu is the father.

Keanu asked if his sister wanted to keep the baby, and told her that it’s not too late to explore other options. Bernadette stated that she did not want to have an abortion to which her brother responded with support and generosity. Keanu offered to, “pay for everything,” and said he would not tell their mother, instead he would keep, “our secret, no one’s ever going to find out.”

Unfortunately for the siblings, Karen was standing on the other side of her daughter’s bedroom door, listening to every word. The look of horror on her face, as well as the covert discussion, left many viewers to conclude that incest may be a factor in this storyline.

After a long and painful weekend, EastEnders fans were relieved when it was finally revealed in tonight’s episode that Keanu is NOT his sister’s baby-daddy.  Instead the father to be is a teenager named Callum, who we will most likely be seeing a lot more of.