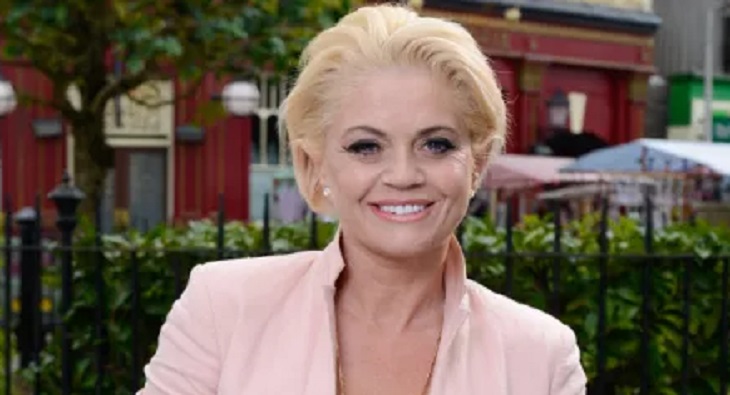 Former ‘EastEnders’ cast member Danniella Westbrook [Samantha Mitchell] let fans know she spent the better part of a day catching up on the British drama. Danniella took to social media to comment on the current storyline as well as former co-stars acting abilities.

“Catching up on @bbceastenders superb acting but who the hell decided to write a bus in2it! Over 20 years not 1 bus! U can nearly fit a car.”

Danniella went on to explain about the writing, reminding viewers that “with all the stalls and bridges you can’t get a car down bridge street…so why a busy. Silly old episode!”

Why is Danniella Westbrook complaining about the writing on the BBC drama? It wasn’t long ago that Danniella joined the hosts of ‘Loose Women’ that she was lucky to return to ‘EastEnders.’ Her character Samantha returned briefly when mum Peggy Mitchell [Barbara Winters] died.

Leaving ‘EastEnders’ the first time in 1993, Danniella joined the cast of ‘Frank Stubbs’ as Dawn Dillion which ended in 1994. The producers of ‘EastEnders’ asked Danniella to return to the show, but at that point was reportedly battling some wild partying habits and it began to affect her work.

This led to TPTB terminating Danniella’s contract and writing out Samantha. Danniella’s off-screen behavior, as well as her frequent tardiness contributed to the decision to let her go. In 1999 the producers considered recasting the role, but decided to give Danniella another shot.

It was the same year Danniella split from 24-year-old fiancé Tom Richards. The couple called off their wedding after several public arguments.

After this public dig at ‘EastEnders’ writing team would TPTB still consider rehiring Danniella Westbrook and incorporating Samantha Mitchell back into the storyline? Let us know what you think in the comments below!  And, don’t forget to check Soap Opera Spy for more EastEnders spoilers and news.

‘The Young and the Restless’ Spoilers: Lauren Should Be Thanking Gloria Instead of Scolding Her – Sabotage Is Disguised Gift