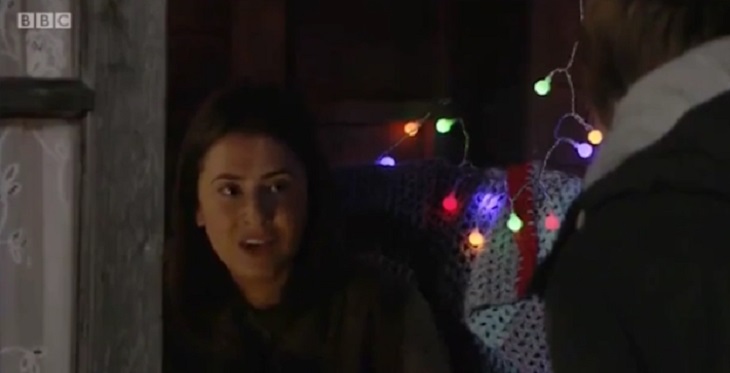 Is Jasmine Armfield (Bex Fowler) about to leave the popular soap, “EastEnders,” for the smash tv hit, “The Voice?” Fans went wild after the teen sang a version of Dido’s, “White Flag,” on the BBC One show, with some calling upon her to audition for, “The Voice.”

Armfield’s fans set social media on fire after Bex sang on the hit soap last week.  Even Michelle Fowler was impressed, telling the songbird that her voice was lovely. But, it was just like Bex to retort, “No, it was great!”

“Bex has a great voice.#EastEnders,” read one tweet, with another adding, “What a lovely voice Bex has❤ #EastEnders.”

And a least earnest fan insisted, “Bex should go on The Voice 😂 her voice is amazing #EastEnders.”

All of the positive well-wishes are in stark contrast to Bex’s current dilemma. When the pretty brunette decided to sext Shakil, she had no idea that their private pictures could end up online. Oops!

Her “friend” Louise sunk to a record low by stealing Bex’s phone and routing the naughty pics to bad girls Alexandra and Madison.

Poor Bex was further betrayed when Shakil did nothing to stop mean Keegan when he taunted her with a different kind of video. It seems that Keegan thought it was funny to tease Bex with video of her during the show’s recent epic bus crash scenes. Who does that?

Related: Will Danny Dyer Become The Next Dr. Who? Fans Launch Online Campaign!

Loyal fans know that TPTB are teasing the return of Kelvin Carpenter to, “EastEnders.” The popular character fronted a band in Walford during the 80’s.

Are Bex’s and Kelvin’s paths about to cross? And if so, will Bex’s life be forever changed by an encounter with the former Walford musician?

“EastEnders,” fans, we want to know what you thought of Jasmine Armfield’s lovely singing voice. And, would you like to see Bex involved in a musical storyline?

WATCH: ‘The Bold and The Beautiful’ Preview Video Tuesday, February 14