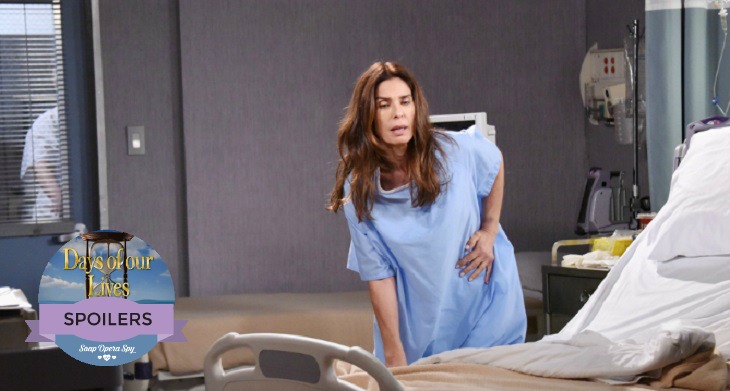 “Days of Our Lives” spoilers for Tuesday, January 17, tease that some major action is about to go down. DOOL fans know that Anna (Leann Hunley) is on a mission for vengeance. She would do anything to make Stefano (Joseph Mascolo) pay the price. Carrie (Christie Clark) and Austin (Austin Peck) have been trying to keep a close eye on Anna, but she’ll somehow manage to slip out undetected.

Once they discover that Anna is missing, Austin and Carrie will begin a frantic search. They’ll hope to find Anna before she causes more drama, but they won’t accomplish that goal. “Days of Our Lives” spoilers reveal that Anna’s dangerous desires will stir up plenty of trouble.

Across town, Rafe (Galen Gering) will speak with Steve (Stephen Nichols), Paul (Christopher Sean) and Marlena (Deidre Hall). They’ll prepare for an upcoming arms dealer meeting, which Stefano is supposed to be present at. After their plan is in place, Rafe will head to the new location with Paul and Steve.

The car believed to be carrying Stefano will arrive, but Anna will stun everyone with a sneak attack. “Days” spoilers indicate that Anna will shoot at her intended target, but she’ll end up hitting Steve by mistake. He’ll take a bullet to the shoulder as the vehicle speeds off. Rafe and the gang will obviously be furious over Anna’s constant chaos.

DOOL spoilers state that Kayla (Mary Beth Evans) will get updates on Steve’s wound. The call will make her incredibly nervous about the peril Steve is facing. Kayla will immediately book a flight to Prague in hopes of keeping her love out of harm’s way. She’ll be desperate to get Steve home in one piece.

Other “Days” spoilers say Hope (Kristian Alfonso) will wake up in a farmhouse. She’ll feel pretty rough thanks to her injuries, but at least someone is taking care of her. Hope will be surprised when she realizes Eric (Greg Vaughan) picked her up and has been trying to nurse her back to health.

In Salem, the teens will make a big decision. Claire (Olivia Rose Keegan), Ciara (Vivian Jovanni), Theo (Kyler Pettis), Joey (James Lastovic) and Jade (Danielle Haugh) will agree to move in together. You’ll notice that Jade has a new look in Tuesday’s episode. This will mark Danielle Haugh’s first airdate on the NBC soap.

“Days of Our Lives” rumors hint that Jade and Joey will encounter more challenges soon. We’ll keep you posted as other news comes in. Stay tuned and don’t forget to check Soap Opera Spy often for the latest “Days of Our Lives” spoilers, rumors, updates and news.

‘The Bold and the Beautiful’ Spoilers: What To Look For In 2017?

WATCH: ‘The Bold and The Beautiful’ Preview Video Tuesday, January 17