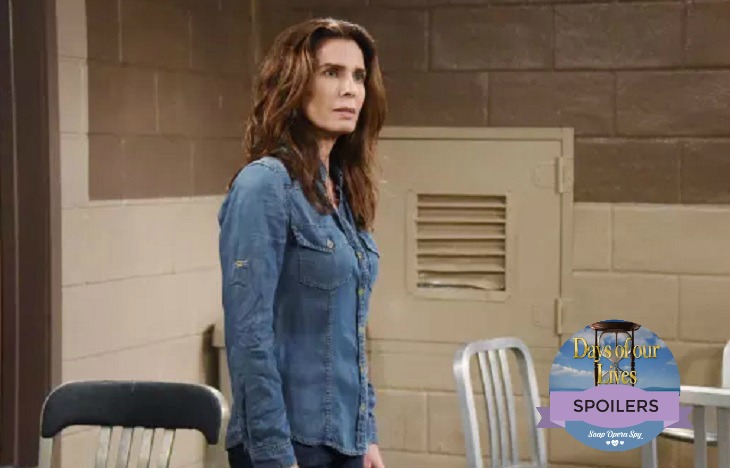 “Days of Our Lives” episode spoilers tease that cop-turned-con Hope Brady (Kristian Alfonso) just can’t catch a break! This week on “DOOL” she finally ends up outside the prison walls, but ultimately attacks her rescuer instead of thanking him. In the ensuing melee Hope ends up unconscious and vulnerable to what happens next.

Hope was institutionalized after confessing to the murder of town bad man, Stefano DiMera (Joseph Mascolo). No one shed a tear over the Evil One’s fate, but good-hearted Hope was wracked with guilt and insisted on confessing to what she assumed was her crime: cold-blooded murder.

But Stefano isn’t called The Phoenix for nothing! Months after his presumed death, Stefano has been spotted in Prague, conducting the kind of nefarious, low down, dirty business tricks he’s famous for.

The Salem PD and Hope’s friends are all working to prove that Stefano is really alive and get Hope sprung from prison. But will their efforts be in vain?

Behind bars former cop Hope was a marked woman. The other cell mates attacked her, killed her protector, and left her an ominous warning that she’s next in line for the undertaker.

But now her jailbreak threatens to compromise any good that might be done on her behalf. Even if Stefano is found, Hope is now a wanted fugitive. And the cops have orders to shoot to kill!

Hope’s main ally, and fellow cop Rafe (Galen Gering), is in Europe searching for Stefano. When her rescuer discovers that their tussle has left Hope unconscious, he panics and flees leaving Hope behind. She is bleeding from an open wound and things look dire for the brave detective.

That is until she is taken by someone from her hiding place, to an undisclosed location. Does this person intend to help or harm Hope? Will Hope remember who she is, and what she’s done when she wakes up? Could Princess Gina suddenly reappear?!

Stay tuned DOOL fans, things are about to take an interesting turn for Hope Brady!

‘General Hospital’ Spoilers: Can Liz And Kiki Team Up And Save Franco Before It’s Too Late?