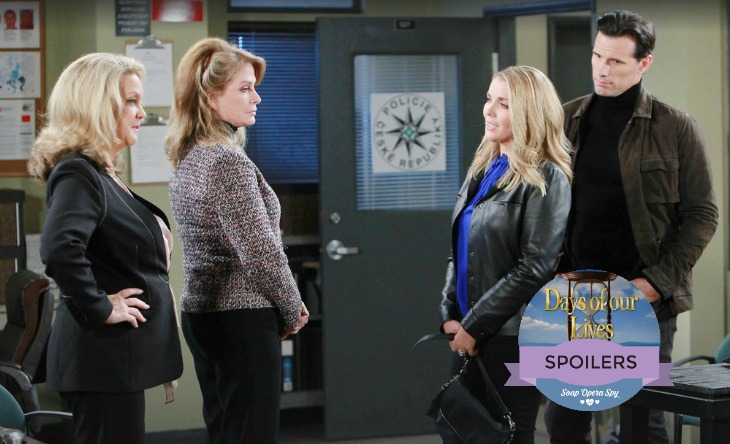 “Days of Our Lives” spoilers for Wednesday, January 11, tease that the Salem PD will be notified of Hope’s (Kristian Alfonso) escape. DOOL viewers know Hope didn’t really make a break for it – at least not willingly. After chloroforming Hope and placing her in a dumpster, Hattie (Deidre Hall) convinced Chet to get Hope out of there.

Once the news makes it to Hope’s loved ones, they’ll all fear for her life. Hope wasn’t safe in prison, but she’s not safe beyond those walls either. “Days” spoilers say Shawn (Brandon Beemer), Ciara (Vivian Jovanni) and Kayla (Mary Beth Evans) will worry about Hope’s fate. The cops will shoot to kill if they catch Hope fleeing from them.

Meanwhile, Rafe (Galen Gering) will focus on clearing Hope’s name. He’ll get ready for an important meeting in Wednesday’s episode. Steve (Stephen Nichols) and Paul (Christopher Sean) will join in the preparations. They’ve found a powerful arms dealer and Steve’s instincts tell him the man in charge is truly Stefano (Joseph Mascolo).

However, “Days” fans shouldn’t expect this adventure to wrap up anytime soon. There are still plenty of ambushes and hot pursuits on the way. For now, we’ll all be waiting to see how things turn out for Anna (Leann Hunley) and Marlena (Deidre Hall). They just got arrested and they could use a little help.

“Days of Our Lives” spoilers reveal that Carrie (Christie Clark) and Austin (Austin Peck) will rush over to save the day. Anna will clash with her daughter when she arrives. They’ll argue about Anna’s actions and her current attitude. Carrie will insist that her mom needs to cool it and let her handle this.

Since Carrie is a top-notch lawyer, she’ll believe she can get Anna out of the mess she’s in. She’ll undoubtedly assist Marlena as well. Austin will do whatever he can to support Carrie’s endeavor. This isn’t the family reunion any of them had in mind, but they’ll try to deal with the problems they’re facing.

Back in Salem, Deimos (Vincent Irizarry) will stun Nicole (Arianne Zucker) by popping the question. He’s proposed before, but he didn’t get the answer he wanted. “Days of Our Lives” spoilers say Nicole will decide she’s ready to tie the knot. Deimos won Nicole over and she’s committed to a future with him.

DOOL rumors hint that Nicole could have a change of heart before long. We’ll give you updates as more info comes in. Stay tuned and don’t forget to check Soap Opera Spy often for the latest “Days of Our Lives” spoilers, rumors, updates and news.

WATCH: ‘The Bold and The Beautiful’ Preview Video Wednesday January 11