‘Days Of Our Lives’ POLL: What Was Your Least Favorite DOOL Storyline In 2016? VOTE! 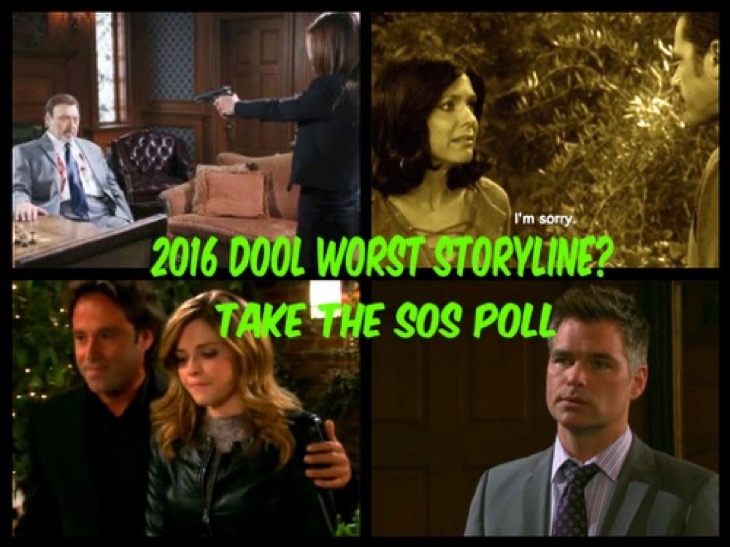 Days of Our Lives (DOOL) has had many repetitive storylines this year. Probably none worse than Stefano DiMera (Joseph Mascolo). Hope Williams Brady (Kristian Alfonso) is currently serving time in prison for the death of Stefano, but now Shane Donovan (Charles Shaughnessy) has revealed that the Phoenix has risen again.

DOOL fans know that Joseph Mascolo has passed away, so in order for this storyline to work he either had to record scenes before he passed away, or the role has been recast; neither of which will make fans happy. Isn’t it time to let Stefano go?

Theresa Donovan (Jen Lilley) came to Salem with a chip on her shoulder. She was set on destroying Jennifer Horton (Melissa Reeves). She ended up falling in love with Brady, and after everything horrible she had done to him and the people he loved, he fell for her too. Many people hated when this happened and their concerns seemed to be proven when she literally up and left town after breaking Brady’s heart, leaving him to raise their son, Tate alone.

One of the hardest stories to watch was JJ (Casey Moss) beginning a relationship with Gabi Hernandez (Camila Banus). Days of Our Lives fans find this a hard pill to swallow. Gabi may have just gotten out of prison but she really hasn’t been involved with that many men. JJ is barely out of highschool and he has already been with her sister, Paige Lawson (True O’Brien), Paige’s mother Eve Donovan (Kassie DePaiva), Paige’s Aunt Theresa. This coupling doesn’t make any sense and most people don’t want to invest in them.

How bizarre was it for Aiden Jennings (Daniel Cosgrove) to make a return to Salem this year? It was hard for most fans to watch Hope move on from her longtime love, Bo Brady (Peter Reckell) to Aiden. When Aiden attempted to kill her on their wedding night we thought it was over when Bo killed him before meeting his own demise. For Aiden to come back from that and expect Hope to forgive him and love him again was probably the worst plotline ever!

The arrival of Deimos Kiriakis (Vincent Irizarry) threw long-time fans for a loop. Not once has Victor mentioned his younger brother, nor the fact that Nicole Walker (Arianne Zucker) is a spitting image of the woman, Helena who tore the brothers apart in the first place. Victor was married to Nicole years ago, wouldn’t that have been brought up at some point then?

The most despicable story was told when Deimos poisoned Maggie (Suzanne Rogers), paralyzing her. Nicole and Maggie had grown quite close, especially after Daniel (Shawn Christian) died, so how could they honestly make fans believe Nicole would fall for the very man who nearly killed Maggie?

Abigail Deveraux – DiMera (Marci Miller) has probably got the worst story of all time. When she was put in the psychiatric facility to deal with her break down over Ben Weston (Robert Scott Wilson), we didn’t expect her to return any time soon, so when she snuck back into Salem, living in her mother’s attic we didn’t want to invest in the story. It didn’t make sense why Abigail would pretend to be dead when she had a husband she adored and a little boy who needed his mother.

Chad DiMera (Billy Flynn) had finally accepted that Abby was gone and was rebuilding his life, gradually falling in love with Gabi. What did Abby expect when she returned after being declared dead 6 months earlier; Chad is a young man who isn’t expected to live as a monk forever. Abby waited too long to reveal herself to him, and she is entirely to blame for it.

Please take our poll and let us know what you think; which Days of Our Lives storyline is your least favorite? Be sure to tune into NBC’s Days of Our Lives (DOOL) daily to catch up on all their storylines and check Soap Opera Spy often for updates, news, rumors and spoilers.

‘The Young and the Restless’ News: Eric Braeden Victim of Twitter Hack

‘The Bold and the Beautiful’ Spoilers: Ivy Wants Quinn to Be Honest About Her Desires – Ridge Confronts Eric About What He’s Unleashed