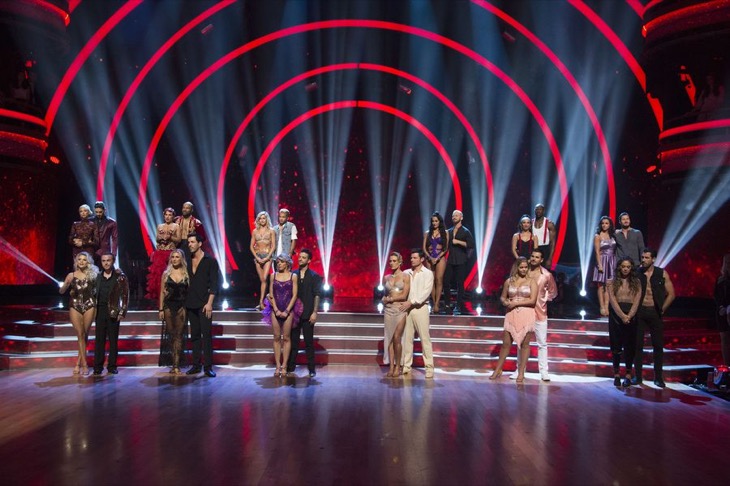 As far as dances, three couples will be showing off their fancy footwork with jazz numbers for Monday’s episode. Nick Lachey and Peta Murgatroyd will dance to ‘Jump (For My Love)’ by the Pointer Sisters. Nick’s wife Vanessa Lachey and her partner Maksim Chmerkovskiy will dance to ‘Girls Just Want to Have Fun’ by Cyndi Lauper. Sasha Pieterse and Gleb Savchenko will dance to ‘I Can’t Help Myself (Sugar Pie, Honey Bunch) by the Four Tops.

Meanwhile, Lindsay Sterling and Mark Ballas will be doing the jive to ‘Wake Me Up Before You Go Go’ by Wham! Jordan Fisher and Lindsay Arnold will do the Charleston to ‘The Glory Days’ from the hit Disney film The Incredibles. Derek Fisher and Sharna Burgess will do the cha-cha-cha to ‘The Fresh Prince of Bel-Air’ by DJ Jazzy Jeff and the Fresh Prince. Drew Scott and Emma Slater will do the Argentine Tango to ‘Red Right Hand’ by Nick Cave and the Bad Seeds.

Finally, Victoria Arlen and Val Chmerkovskiy will be doing the quickstep to ‘Tubthumping’ by Chumbawamba while Nikki Bella and Artem Chigvinstev will do the Viennese Waltz to Rihanna’s ‘Love on the Brain.’

Apparently, Victoria Arlen will start her routine with a whiskey drink. Also, many fans can’t help but wonder why Frankie Munez chose to dance to ‘It’s Gonna Be Me’ by *NSYNC. There’s a possibility that he might have wanted to spite Nick Lachey, who used to be a part of 98 Degrees.

Tell us, who do you think will take the Mirror Ball home this season? Dancing With The Stars Season 25 airs every Monday on the ABC network at 8pm EST. In the meantime, don’t forget to check back with Soap Opera Spy for all the latest news, updates and spoilers on Dancing With The Stars and all of your favorite primetime television shows right here!

The Young and the Restless RUMOR: Nick Bankrupts Victor – Kevin Betrays the Moustache