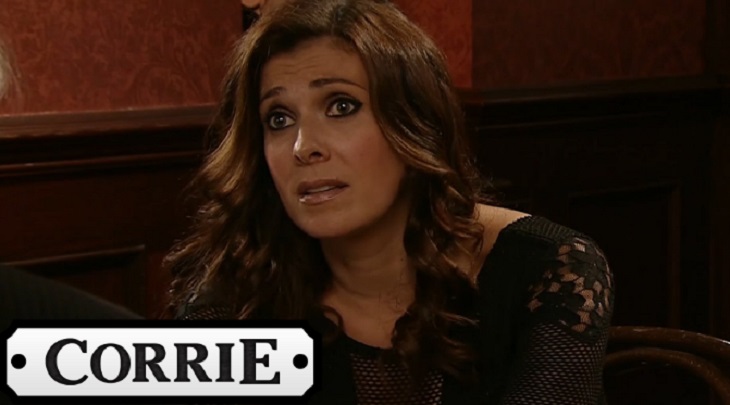 “Coronation Street,” fans can rest easy, one of their favorite characters will definitely be onscreen for another year! The ITV show has confirmed that actress Kym Marsh, who plays Michelle Connor, has been signed to a one year contract.

Kym has won over audiences and critics alike with her brilliant portrayal of a woman beset by one tragedy after another. Corrie exec’s were keen to resign their bona fide star, and now it looks like fans will be treated to another year of epic storytelling and must-see acting.

Related: Maria Returns To Corrie, Fresh Out Of Prison – Watch Out Aidan!

Michelle has been front and center with a gripping storyline that shows no signs of fading. In one of the show’s biggest plotlines, tragic Michelle gave birth at 23 weeks, and the baby did not survive.

When their baby Ruairi died, Michelle and Steve’s marriage was adversely affected and it was uncertain if the couple would remain together.

In an ironic twist of fate, Michelle then learned that her husband Steve fathered another woman’s baby; cheating Steve had a booze-fueled one night stand with Leanne.

When Michelle eventually discovered that her unfaithful husband was the father of Leanne’s baby, she felt she had no choice but to leave him and their marriage.

Understandably hurt, Michelle went after Steve for everything he owned, with every ounce of strength she had. She demanded half of their assets, including their beloved bar, Rovers Return.

Kym quickly became a fan favorite after joining Corrie 11 years ago. She was married to, “EastEnders,” actor Jack Ryder from 2002 to 2009. Kym has two children from a prior relationship and she and husband Jamie Lomas have one daughter, Polly.

What do you think Corrie fans? Are you happy to see that Kym Marsh will remain with the show for at least another year? Tell us what you think is in store for the beautiful brunette, and what future storylines you would like to see the show take on!