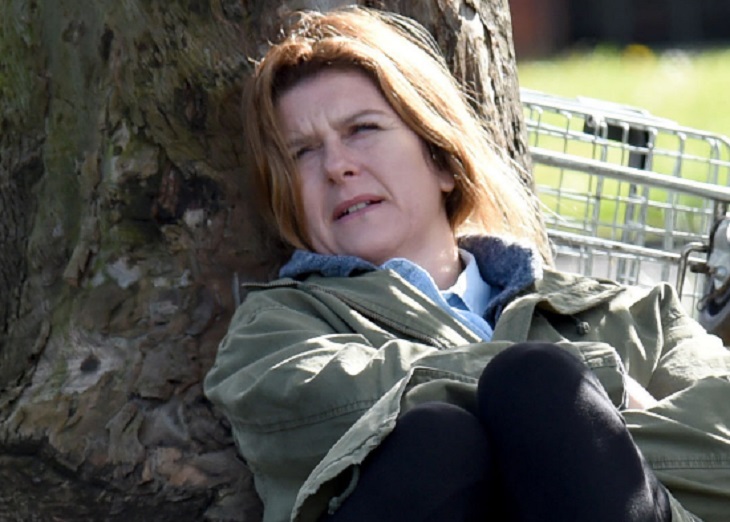 On, “Coronation Street,” Sally’s online troll may be closer to home than anyone dreamed. Explosive show spoilers reveal that her long-lost sister Gina could be tormenting her, all while under the influence of street drugs.

This week Gina Seddon (Connie Hyde) was spotted filming scenes for the ITV soap, looking disheveled and rough, leading to speculation about her state of mind. Could she be behind the online campaign of terror that Sally’s experiencing, as well as a drug addict?

The character has been gone since 1989, when Gina left the cobbles to marry a truck driver. In scenes filmed this week, Tim Metcalfe (Joe Duttine) can’t believe his eyes when he spies his sister in law slumped over next to a tree, with a shopping cart upended beside her.

Later Gina is seen in Tim’s cab, awake but disoriented. But it doesn’t take long for Gina to come to, as she’s soon laughing and seemingly unperturbed about her situation. Online speculation has exploded as to Gina’s condition, with many convinced that Spice is to blame for her present state.

The use of the synthetic drug has exploded across the globe, often leaving users in a catatonic, disabled state. Many countries, including the UK, are facing a potential epidemic with the hallucinogenic drug. Is the show about to tackle this social issue in an upcoming storyline? It’s currently airing a storyline on another social plague, online grooming.

Related: Corrie Snubbed By The BAFTA’s

In that plot, young and impressionable Bethany Platt is in the clutches of a man, Nathan, who’s exploiting her sexually. Corrie viewers have mostly commended the soap for tackling the issue, leaving lots of positive online comments. Why has Gina suddenly returned to Weatherfield, and why hasn’t she contacted her family? She looks to be in poor shape, but seemingly unbothered by her situation.

Could she be addicted to drugs? And why, as online speculation is trending, would she torment her sister in such a cruel way? Stay tuned Corrie fans, in this case the truth might be stranger than fiction!

The Bold and the Beautiful News: Pierson Fode Dating Dancing With The Stars’ Sharna Burgess