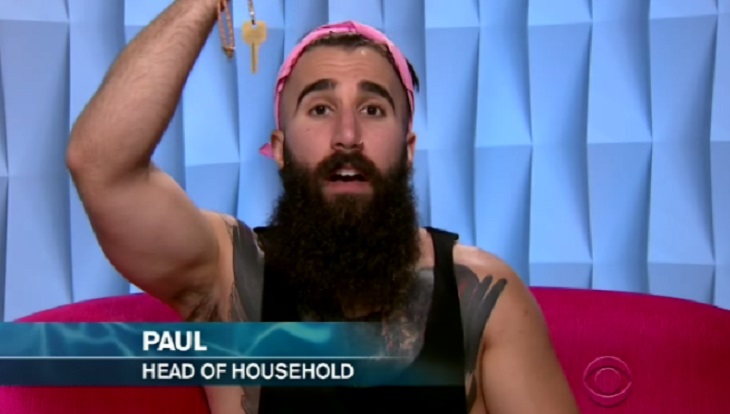 The winner of the comp will be safe from eviction that week, but there is a consequence for participating. The player to come in last in the comp will go up on the block as a third nominee for eviction.

“Big Brother” (BB19) spoilers say for the live feed viewing the ‘Temptation Competition’ will most likely be held beforehand on Friday nights, shifting the nomination ceremony.

A competition to save yourself, besides HoH, for the week will be a first in “Big Brother” history. Of Course, fans will be able to see it play out on Sunday night episode on CBS 8/9c.

”Big Brother” (BB19) starts week 5 in the house with Paul Abrahamian as the new HoH. With the new twist to the game the ‘Temptation Competition’, and Jessica Graf announcement (while not completely truthful) regarding the last temptation, how do you think this will affect Paul’s game? Will he still target Jessica and Cody Nickson, or maybe Mark Jansen and Elena Davies for eviction this week?

“Big Brother” live feed spoilers showed us that the houseguest were clued into the twist to the game earlier today. Many jumped at the chance to play to remain safe for the week, however, Jessica and Cody did not choose to play in the ‘Temptation Competition. Winning the first ‘Temptation Competition’ was Mark, which keeps him safe from eviction this week. In last place was Jason Dent, which automatically put him up as the 3rd nominee for eviction this week.

Related: Who Will Be Blindsided In Week 4 Live Eviction?

“Big Brother” (BB19) HoH for week 5 Paul, has his work cut out for him and will need to get creative in his nominations. Will he call Jessica’s bluff on the temptation keeping her and Cody safe? She can only use it ONCE and there are only 2 weeks left to do so, however, she told the house that she can keep them safe for several weeks (not true). During the Nomination Ceremony, Paul nominated Jessica and Cody for eviction along with Jason being named the 3rd nominee for coming in last during the ‘Temptation Competition’.