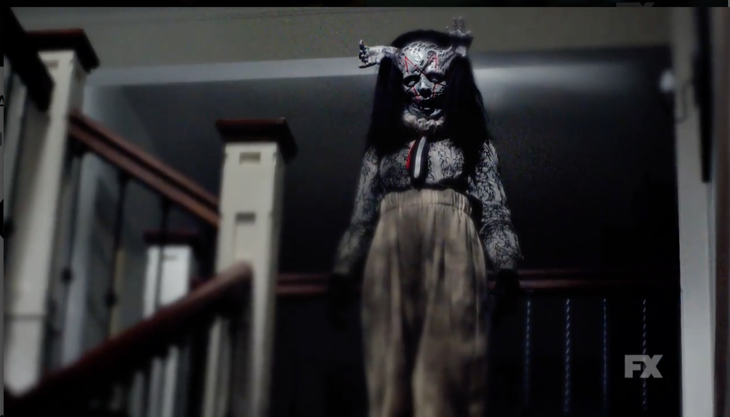 American Horror Story (AHS) spoilers for Episode 2 reveals that Ally (Sarah Paulson) and Kai (Evan Peters) will come face to face in a scary confrontation. Winter (Billie Lourd) and Oz (Cooper Dodson) will grow closer, despite Ally’s fears that the new babysitter isn’t a good fit for the family. Ivy (Allison Pill) appears to have ties to the cult and could be the reason for Ally’s breakdown.

Kai knocked on Ally’s door and asked her for a drink of water. That’s when he jumps and scares her and asks her what really scares her. She quickly shuts the door and bolts it shut. It isn’t clear if Aly knows who he is.

AHS spoilers suggest that Ally and Kai have some sort of history. He seems to know how to get under her skin and what really bothers her. It will likely be addressed later in the season.
Winter pulls Oz Closer

During American Horror Story Episode 1, Winter was hired to babysit 10-year-old Oz after his mother; Ally went back to work. Winter’s first week on the job, Ally’s neighbors and close friends were murdered by a group of clowns. Law enforcement believes that it was a murder-suicide and poses no threat to Ally’s family.
During Episode 2, Oz and Winter will grow closer. In the FX promo video, Winter tells OZ to tell her his biggest fear. It will make both stronger. She wants to know what he fears so she can use it to control him. There’s something pretty creepy about Winter. She isn’t as nice as she seems right now.

Ivy is a member of the cult?

American Horror Story fans think there’s something off about Ally’s wife, Ivy. She pushes Ally to get on with her life and stop being so upset about Donald Trump’s presidential win after only a few months. She threatens to leave her at one point, which made many AHS fans wonder if she is as sweet and nice as the show is making her seem.

One theory is Ivy is really working with Kai and feeding him information about Ally’s fears. If she really is a member of the cult, it could explain how Winter knew about the babysitting job so quickly.

Watch the promo for Episode 2 and share your opinion below. Stick with Soap Opera Spy for more American Horror Story spoilers, news, and casting updates!

Days of Our Lives Spoilers: Julie Reacts to Finding Eli with a New Girl