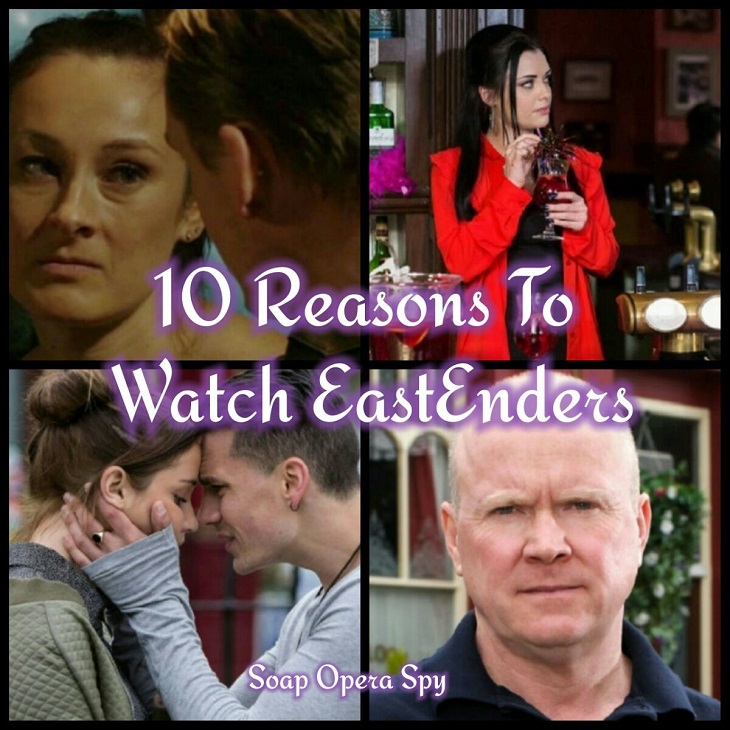 If you’ve never watched EastEnders before, you’re seriously missing out. This is one of the best TV soaps of our time. It’s gritty, smart, and interesting. Don’t believe us? Well, check out these reasons you should watch the series.

1. It deals with real-life issues

Recently, EastEnders was dealing with Phil’s alcohol problem. One of the greatest things about this show is the fact that it never shies away from tough topics. Alcoholism is a serious problem — and one that the series handles in style.

2. There are some real murder mysteries

For some reason, Albert Square is a seriously dangerous place to live. Over the years, there have been so many murders there that we’ve simply lost count. Every time someone is killed, the mystery keeps us tuned in.

3. No one gets a happy ending

While this may sound terrible, it’s part of the reason we watch the show all the time. Just when you think that someone is about to live happily ever after, something terrible happens. Whether they end up getting a fatal disease or just find their spouse cheating, there are so many things that could go wrong.

4. The Queen Vic is an institution

If you’ve ever watched the show, you will know that the Queen Vic is the heart and soul of the square. Since the soap began, this place has changed hands so many times. It’s where all the drama goes down too!

In case you didn’t know, Lee Ryan is best-known for being in the boyband ‘Blue’. He was a seriously popular singer back in the early 2000s. Still, times have changed and so has he. Now, he’s one of the major characters on Eastenders.

In many series and even soaps, people have crazy good jobs. Well, EastEnders is not like that. Here, the characters work in laundrettes, bars, and shops. Nothing fancy.

7. The London accents are so endearing

If you’re a fan of all things British, EastEnders is the soap for you. The London (or cockney) accents are just so adorable that you will fall in love with them right away.

8. Some characters are just plain evil!

Since the soap first started, there have been a whole load of characters you could consider ‘evil’. Of course, the worst was Dirty Den back in the 80s and 90s. He was one of the cruelest men ever.

When someone starts to tell you about the really interesting dream they had last night. #EastEnders pic.twitter.com/fpsMXIHBqH

9. The women are seriously strong

One thing that everyone loves about EastEnders is the women. The ladies on this series are so strong and powerful. Sometimes, they even make the men look bad.

10. It reminds you that your life isn’t that bad

What with everything that goes down on this soap, it makes your own life seem pretty normal. At least you don’t have to deal with the crazy drama that people deal with on this series, right?

‘The Young and the Restless’ (Y&R) Trivia: How Well Do You Know Katherine Chancellor? Take The Challenge!

The Young and the Restless (YR) Spoilers: Chelsea Must Explain Her Past – Jordan’s Reputation Wrecked