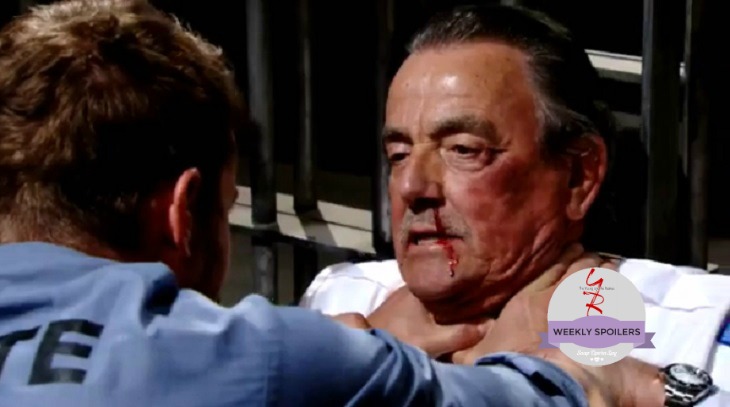 ‘The Young and the Restless’ spoilers for the week of August 15-19 reveal that Genoa City is a powder keg waiting to explode. Everyone will be affected in some way by the deceit, lies and treachery that have plagued the town for so long.

Tears, panic, betrayal, payoffs, passports and more – what is happening in Genoa City? Adam [Justin Hartley] is in danger and the ‘Y&R’ video spoiler teases that Adam will attack Victor [Eric Braeden]. This one isn’t an ordinary Adam vs. Victor duel. Adam will try to strangle Victor who already has a bruised face and a bloody nose.

Victor won’t be the only on the receiving end of an attack. Two prison guards will grab Adam, but are they restraining him or issuing a beat down?  Is the wild smackdown really happening, or is it a figment of Adam’s imagination?

The prison will go on lockdown while Chelsea [Melissa Claire Egan] is trying to visit Adam. As the red lights flash and the guards rush around, a weeping Chelsea will cry out, “ADAM!”

Chelsea won’t be the only one in tears next week on ‘The Young and the Restless.’ A distraught and sobbing Chloe [Elizabeth Hendrickson] visits Delia’s memorial site. What is Chloe’s next move? Could it have something to do with a bag full of money and a passport?

Dylan [Steve Burton] is close to discovering Chloe is responsible for Adam’s wrongful conviction for the murder of Constance Bingham [Sally Kellerman].

Despite Dylan’s suspension from the GCPD somehow he and Paul [Doug Davidson] will work together to get to the truth about Chloe and Victor’s association. The duo will find a shocking note, or is a page from a diary?

Jack [Peter Bergman] is on the verge of finding out Phyllis [Gina Tognoni] and Billy [Jason Thompson] have betrayed by carrying on an illicit affair. It looks like things are over between Victoria [Amelia Heinle] and Travis [Michael Roarke].

‘The Young and the Restless’ spoiler video for August 15-19 promises, “This week it doesn’t get any bigger than this!”

It doesn’t get bigger than this week on #YR!