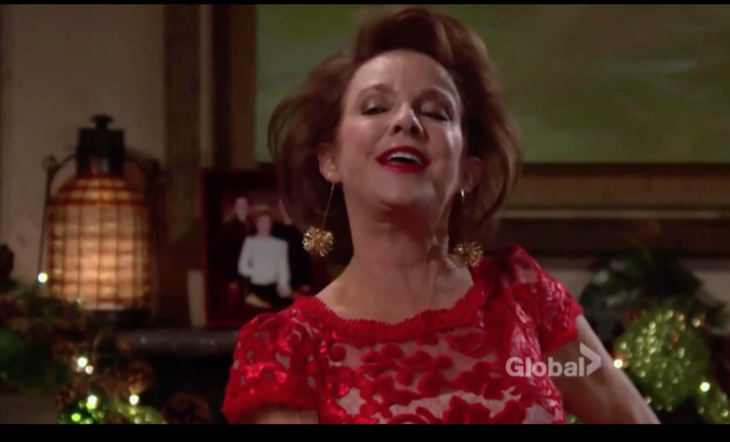 “The Young and the Restless” spoilers for Wednesday, December 21, tease that someone is about to shake things up over the holidays. When Michael (Christian LeBlanc) and Lauren (Tracey E. Bregman) find a huge Christmas present, they’ll be stunned. Lauren will be anxious to see what’s inside this giant box.

Of course, they could never guess what’s waiting underneath the bow and wrapping paper. “The Young and the Restless” spoilers state that Gloria (Judith Chapman) will pop out of the box and declare, “Deck the halls, everybody!” This will certainly be a Christmas shocker.

Kevin (Greg Rikaart) and Michael will be surprised to see their mother back in town. They’ll wonder what convinced Gloria to stop by Genoa City. Gloria will contend that she was missing her sons and wanted to see what they were up to. She just couldn’t let another holiday go by without checking in.

Elsewhere, Nick (Joshua Morrow) and Sharon (Sharon Case) will try their best to get along. Their conflict has really gotten out of hand. Faith (Alyvia Alyn Lind) ran away because of their fighting, but Victor (Eric Braeden) will eventually bring her in from the stable. He’ll hope that they reach a calm agreement for his granddaughter’s sake.

Wednesday’s preview video shows Victor saying, “Sweetheart, I told both your parents that you would like to make up your mind about where you want to stay.” Faith will give Sharon and Nick updates on her wishes. She’ll hope that they can accept her decision and stop their heated battle.

Nick will realize that they have to make changes for Faith’s sake. Sharon will also understand that peace is important. It sounds like they’ll call a truce pretty soon. Whatever happens, Dylan (Steve Burton) will promise to be a rock for Sharon and Faith. He’ll want them to know how much they mean to him.

Y&R rumors hint that some major drama is headed Dylan and Sharon’s way. As Steve Burton’s exit approaches, there will be some big shifts. It appears Sharon will have to face another crisis. Stick with the CBS soap to see if difficult news is in Sharon’s future.

‘The Bold and the Beautiful’ Spoilers: Steffy Insists She Can Handle Quinn – Wyatt’s Ally Gives Him Hope – Bill Plans to Win Brooke Back