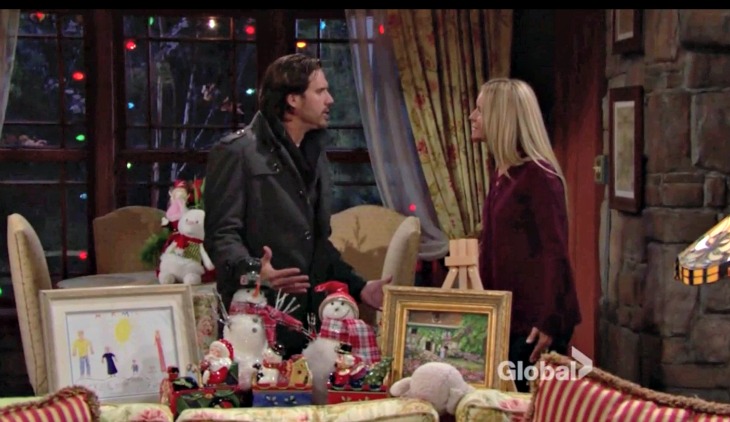 “The Young and the Restless” spoilers for Tuesday, December 20, tease Christine (Laralee Bell) and Paul (Doug Davidson) will have a tiff over Dylan (Steve Burton). It seems Christine won’t approve of Paul’s latest decision. She’ll insist that he’s throwing his son into harm’s way. Christine will ask Paul if he can really live with that.

Paul will undoubtedly defend his actions. They’ll bicker a little, but it’ll be nothing like what’s going on across town. Nick (Joshua Morrow) and Sharon’s (Sharon Case) argument will set Faith (Alyvia Alyn Lind) off in Monday’s episode. Unfortunately, her outburst could fan the flames for her parents.

Sharon and Nick will continue to gripe at each other, but they’ll try to settle down eventually. That’s when they’ll face some scary moments. “The Young and the Restless” spoilers say Dylan will come downstairs with shocking news. He’ll reveal that Faith has disappeared.

Nick and Sharon will immediately start to panic. They’ll feel guilty for fighting in front of Faith and sending her who knows where. Victor (Eric Braeden) will encourage everyone to remain calm. He’ll suggest that Faith couldn’t have gone far.

Y&R spoilers state that Victor will make some calls as he works to find his granddaughter. Nikki (Melody Thomas Scott) will nervously wait by his side. Victor will order someone to search the grounds in hopes of finding Faith. He’ll think she might be spotted nearby if they can get somebody over there pronto.

“The Young and the Restless” spoilers indicate that they’ll track down Faith sooner or later. Sharon and Nick will be relieved when they realize she’s OK. Faith will probably be scolded for running off, but they’ll offer reassurance as well. They’ll want her to know that she’s always loved, even if they disagree sometimes.

Related: With The Change In Y&R Writers – Many Characters Will Be Headed In Different Directions

Nevertheless, it’s a good idea to tone down the arguing around Faith. She obviously can’t handle all of this strife. Nick will determine that he needs to keep the peace with Sharon if he can. Sharon and Dylan will support that plan. They just want what’s best for Faith and Christian. Family is everything to them.

Will runaway Faith finally put an end to Sharon and Nick’s feud? Will they become more cordial exes from now on? Y&R rumors hint that there’ll still be some obstacles, but they’ll press on. We’ll give you updates as other details emerge. Stay tuned and don’t forget to check Soap Opera Spy often for the latest “Young and the Restless” spoilers, rumors, updates and news.

‘Days of Our Lives’ Spoilers: Nicole Helps Chloe Deliver Baby, Will She Have to Choose Between Baby or Deimos?