“The Young and the Restless” spoilers for Thursday, June 16, tease that Summer (Hunter King) will find Luca (Miles Gaston Villanueva) and Nick (Joshua Morrow) having a serious conversation. At Newman Enterprises, Summer wonders what’s up. They were talking about Travis (Michael Roark), but they decide to keep that info to themselves.

After Nick leaves, Summer tries to pry details out of Luca. He stays tight-lipped in an effort to prove his loyalty. Summer is happy Nick and Luca are working together, so she says she’ll let it go for now. Meanwhile, Sharon (Sharon Case) has another nightmare about Sage (Kelly Sullivan). In the dream, Sage hints that she’ll haunt Sharon until she honors her wishes.

Dylan (Steve Burton) sees that Sharon is upset and questions her. She admits she had a nightmare about not being able to save Sage. Dylan thinks there’s more, so Sharon says she’s worried about all of the Adam (Justin Hartley) drama. Dylan assures Sharon that he’s going to figure everything out.

You Might Also Like —> Melissa Claire Egan Dishes On Chelsea And Adam’s Fate – Will ‘Chadam’ Survive The Summer?

Afterwards, Sharon gives Mariah (Camryn Grimes) updates on the nightmare. Mariah insists that Sharon has to find a way to handle her guilt. Nick arrives and can sense that something’s off with Sharon. He asks if she’s OK. Mariah takes Sully upstairs, but comes back down to get Sharon. The baby wants her. 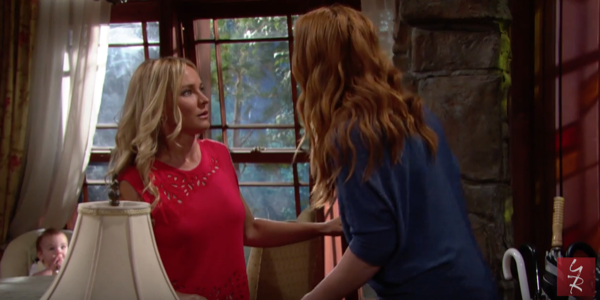 While Sharon is gone, Nick grills Mariah. He wants to know what’s going on with Sharon, but Mariah brushes him off. Once Nick departs, Mariah urges Sharon to get a grip. If she doesn’t, the truth is sure to come out. 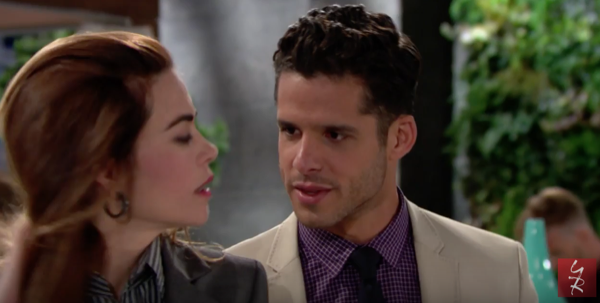 Elsewhere, Travis and Victoria (Amelia Heinle) finish up sex. They decide to head over to the pool. Victoria introduces Summer to the new man in her life. Moments later, Luca speaks with Victoria privately. He can’t believe Victoria is still hanging out with the guy who tried to bring down their company. Victoria is insulted that Luca thinks he’s a major part of Newman. She quickly puts him in his place.

Nearby, Summer chats with Travis and warns him that the family is protective. Later, Travis points out that Summer and Luca don’t seem to be big fans of their relationship. He thinks Victoria’s family seems awfully judgmental. Travis accompanies Victoria to the office. They talk about Victor (Eric Braeden) and Travis takes a look at his portrait.

When Travis spots a press release about the oil spill, he realizes Victoria is going to lie to the media. Victoria defends the decision and Travis makes his exit. Meanwhile, Luca tells Summer that Victoria’s new romance won’t last. Talk turns to Phyllis’ (Gina Tognoni) efforts to drive them apart. Luca suggests that Summer shouldn’t intervene. He feels like he can win her mom over. Summer and Luca lean in for a passionate kiss. They head home to make love.

Other “Young and the Restless” spoilers say Dylan will speak with Paul (Doug Davidson) about Adam’s case. They’ll realize that there’s a forger named Frank Ellis who knows Victor. Dylan states that he’ll check it out. At the penthouse, Chelsea (Melissa Claire Egan) wants Adam to come clean about his deal with Ian (Ray Wise). Adam eventually reveals that he’s going to help Ian make his getaway.

Chelsea is floored by the escape news. She thinks Adam is out of his mind. There’s no predicting what Ian will do once he’s free. Adam will be to blame for any of the crimes Ian commits. Adam feels like it’s the only way out of this mess. He doesn’t think the plan is as risky as it seems. Chelsea gripes about Adam sounding like Victor. 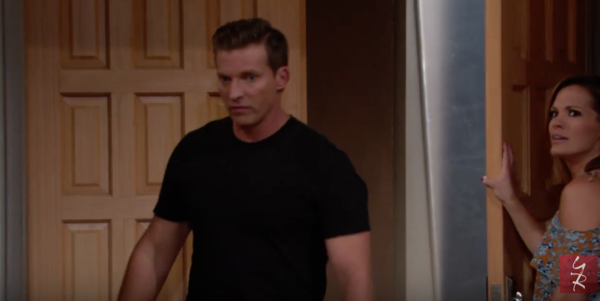 Dylan shows up and says he’s following a lead that could prove Adam was framed. He mentions the forger, but Adam admits that he’s dead. Dylan fears it’s time for Adam to consider taking a plea deal. Adam refuses and Chelsea backs him up. They vow to prove his innocence.

At Crimson Lights, Nick bumps into Dylan. He asks what’s wrong with Sharon and Dylan replies that she’s having nightmares involving Sage. Will Nick start to suspect that Sharon is hiding something? Y&R rumors hint that Sharon will begin to crack under the pressure. Stick with the CBS soap to watch Sharon struggle with the weight of her secret.