“The Young and the Restless” spoilers for Friday, August 26, tease that Victor (Eric Braeden) will explain the situation to Adam (Justin Hartley). At a secluded cabin, Victor apologizes to Adam for going too far in his pursuit of revenge. He’s giving Adam the chance to ditch the Newman name and start a new life with his family.

Victor says the phone will ring soon and Adam will have a very important pitch to make. He adds that this is for family and puts his hand on Adam’s shoulder. Adam places his own hand on top of his father’s. Meanwhile, Dylan (Steve Burton) accuses Chelsea (Melissa Claire Egan) of pulling off one last con to help her husband. He notes that the guards disappeared along with Adam.

Chelsea insists she’s innocent and Chloe (Elizabeth Hendrickson) backs her up. Dylan gets updates on the guards, who were found drugged. Adam and the van are still missing. Kevin (Greg Rikaart) points out that this scheme was perfectly orchestrated. Dylan agrees that it sounds like a move Victor would make.

“The Young and the Restless” spoilers reveal that we’ll see even more engagement party drama. At Top of the Tower, Travis (Michael Roark) is ready to slam Luca (Miles Gaston Villanueva). Summer (Hunter King) doesn’t want to hear it, but Victoria (Amelia Heinle) and Nick (Joshua Morrow) urge her to listen. 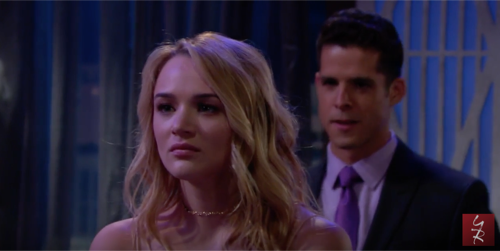 Travis says Luca was the mastermind of the oil crisis and talks about his recent call. Luca claims he wanted Travis to turn himself in. Summer thinks Travis and her family members are all liars. Noah (Robert Adamson) wants Summer to open her eyes.

Victoria and Travis decide to blow this joint. When Mariah (Camryn Grimes) walks in, Noah tells her what went down. Daniel sees Mariah and is blown away by how much she looks like Cassie (Camryn Grimes). At home, Luca wants Summer to come away with him. They can get married elsewhere.

Summer can’t understand why Luca doesn’t want to stick around and clear his name. She brings up his lie about not being able to contact Travis. Luca reluctantly admits that he really did sabotage the oil rigs, but that’s in the past. A future with Summer is all he wants now.

Summer says Luca needs to turn himself in or she’ll do it for him. Luca plans on bolting, so Summer grabs the phone. He tries to wrestle it away from her as Jack (Peter Bergman) arrives. At the ranch, Dylan and Nick show up with accusations. Nikki defends Victor until he steps into the room.

Victor pretends that he has no idea where Adam is. He encourages Dylan to find him. Dylan suspects that Victor has Adam stashed at the house. He forces Victor to stay while he looks. Nikki heads over to the penthouse to see Connor (Gunner and Ryder Gadbois).

As officers lurk at the penthouse, Nikki lowers her voice and tells Chelsea to use the phone she gave Connor. There’s a number programmed in it for her to call once she’s by herself. Chelsea takes Connor upstairs with the phone. Later, Adam’s phone rings and he picks up. He tells Chelsea in a video chat that they can finally be together.

At Victoria’s place, she talks to Travis about Summer being in denial. He hints that love can make you crazy. Travis confesses that he shouldn’t have let Victoria come home without him. A fantasy isn’t enough. Travis says he wants Victoria and kisses her passionately.

Will Travis and Victoria get another shot at love? Y&R rumors suggest that Jill’s (Jess Walton) plans may lead to bad news. Stick with the CBS soap to see if Victoria and Travis can ride the waves.