‘The Young and the Restless’ Spoilers: Chloe Coyly Plays Off Adam’s Death Story, Did She Kill Him? 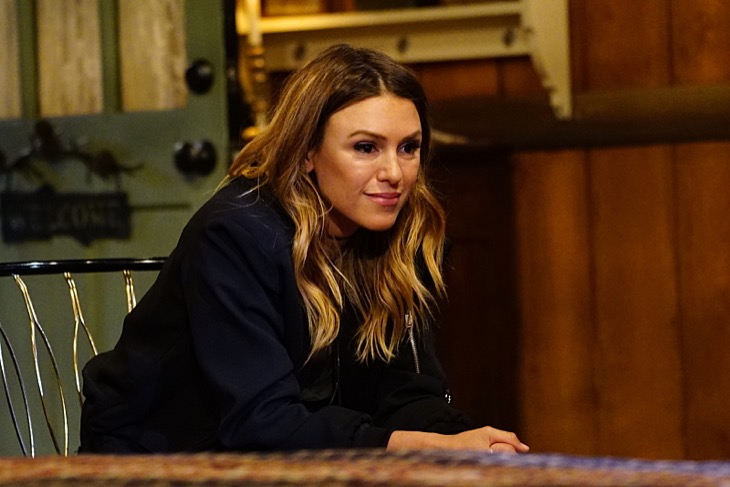 There’s no doubt that Chloe (Elizabeth Hendrickson) shot Adam (Justin Hartley) with a dart on ‘The Young and the Restless’ (YR). At the same time she’s continued coyly playing off the story surrounding his death. Two direct conversations with Victor (Eric Braeden) about the matter continue to leave room for interpretation, as this open-ended arc flows toward fall.

Hartley is officially off Y&R’s roster. How, when, or if the Adam character is replaced isn’t yet known. But, Chloe’s halted reactions are clearly suspicious. It truly seems like she didn’t blow up the cabin. But, the specifics of that scene weren’t shown to intentionally create what should become a stretched mystery.

A black-handed glove was shown holding Adam’s wedding ring. The ring was then placed into a drawer at an unknown location. Chloe was last shown at Delia’s (Sophie Pollono) roadway memorial site. Based upon what she said to the photo of her deceased daughter, it’s possible that Chloe later put that glove on.

Chloe ‘told’ Delia that she had a present for her and noted that Adam had been taken care of. It seems too easy to believe that Chloe was implying that she was behind the cabin explosion. More likely, she took the ring off Adam’s finger after he passed out and then she departed before the structure blew up. Of course, Chloe might not be the glove owner at all, which then makes Y&R viewers wonder who was?

Loyal viewers of ‘The Young and the Restless’ likely aren’t up for another Adam-is-dead-but-isn’t storyline. But, this time around the powers that be at Y&R were faced with replacing one of its leading male actors due to his own voluntary resignation. Even though the mysterious assumed death scenario is playing out again, this situation can be resolved in a relatively short period of time if the show so intends.

Whoever becomes the recast should be on-screen before year’s end. Have him return as Adam this time, not as another character first. Suspension of disbelief could be invoked to pass off a different faced Adam. Then again, the cabin’s flames could logically have led to the need for further plastic surgery. In any event and whenever Adam returns, the first person he should go after is Chloe, who’s become just like the ruthless version of her perceived-dead enemy.

‘The Walking Dead’ Season 7 Trailer Reveals Rick’s Reign is Over, Negan’s in Charge!