‘The Young And The Restless’ Spoilers: Victoria And Billy Get Closer, Still Hope For ‘Villy’ Reunion? 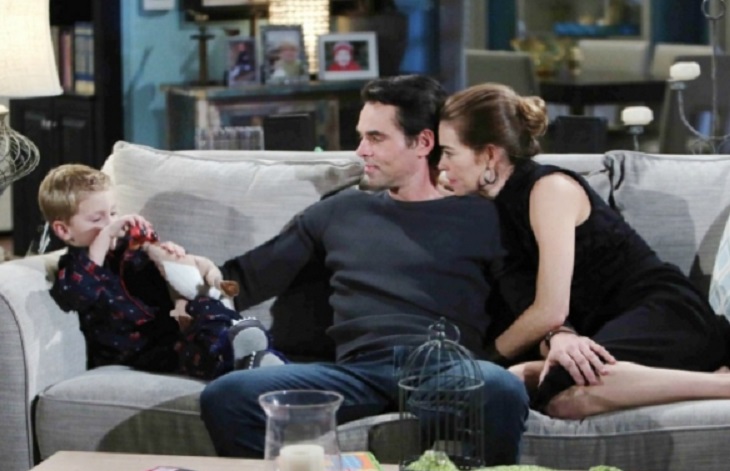 Sometimes love is simple on ‘The Young and the Restless’. Despite Vickie’s (Amelia Heinle) recent romance with Travis (Michael Roark), the ability for that character to return to Genoa City in the future, and Billy’s (Jason Thompson) ongoing link to Phyllis (Gina Tognoni), this formerly married couple still has a shot to reconcile. Whether they make the most of their opportunity remains to be seen.

Jill smartly played her former daughter-in-law. She invited Vickie to meet at the Athletic Club and then coerced her to share a few cocktails. Vickie then smartly took a cab to the Jabot building, where Brash & Sassy recently rented office space. Upon arriving, she confronted Billy about the misguided marketing plans Jill said he was responsible for on ‘The Young and the Restless’.

Billy instantly recognized that Vickie was a bit under the weather. He told her that the proposed advertising pitch was actually Cane’s (Daniel Goddard) idea, after which he and Vickie realized Jill’s intent. If Vickie follows through and joins Chancellor Industries’ newest division, which was originally her corporate baby at Newman Enterprises, she’ll be in Billy’s proximity on a regular basis.

‘Villy’ wasn’t perfect during its run. But, the children Vickie and Billy created would be most ideally cared for if both of their parents were rejoined in a committed marriage. Jill, thinking like any good mother, recognizes that this former duo needs a push to get back together. Her efforts are laudable and just might work.

Phyllis (Gina Tognoni) is attempting to be true to Jack (Peter Bergman) on ‘The Young and the Restless’. And, if Travis returns, or anther man catches Vickie’s attention, that person still won’t hold the personal history advantage with Vickie that Billy does.

For his part, Billy has never stopped loving Vickie. He simply got off track, for the umpteenth time in his life. Vickie rebounded into an easy connection with Travis that briefly produced ‘Tricky’. Yet, this formerly married couple genuinely do care for each other and could rediscover their proper path. Working with a loved one isn’t always a smart option. However, in this particular instance, doing so might serve to revive an energetic power couple.

‘Days Of Our Lives’ Spoilers: Hope’s Life In Danger – Who Doesn’t Want Rafe And Hope Together?