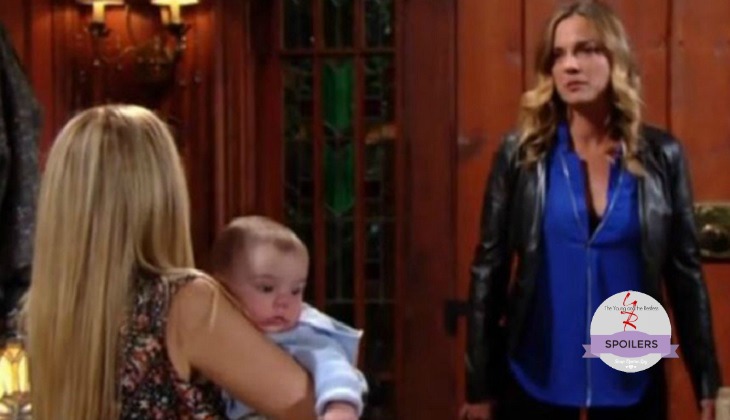 Will Sharon [Sharon Case] ever tell the truth on ‘The Young and the Restless?’ Sage [Kelly Sullivan] is on a mission, haunting Sharon for not revealing to everyone that Sully is actually Christian. Sage’s dying wish was that Sharon confess to Nick [Joshua Morrow] that the baby he thought was dead was actually alive.

Related: Justin Hartley Begins Filming Primetime’s ‘This Is Us’ – Will He Stay At ‘Y&R?’

Throughout the course of this week, viewers witness Sharon being tormented by Sage. And, it looks like Sharon is headed to her breaking point that could lead her to finally confess. Sharon has been having nightmares of Sage and seeing her in her home even while having a conversation with her daughter Mariah [Camryn Grimes].

Mariah is worried about her mother and is advising her that probably seeing a shrink is the best solution for her. But, Sharon refuses, especially after remembering what Dr. Anderson [Ex-Elizabeth Bogush] did to her. ‘The Young and the Restless’ spoilers reveal that Mariah, being the loyal and lovely daughter she is, will offer to pretend to be someone in Sharon’s case while she sees a shrink on her behalf.

And things are getting even worse now that Sharon paved the way for Mariah to take over Sage’s job at Chelsea 2.0. Sage is rather angry that Sharon is still withholding the truth from Nick. Sage will not rest in peace until Sharon reveals everything. So will Sharon finally man up and tell Nick the truth? Does she have the guts to do it? She has attempted to do it a couple times before but couldn’t go through with it because she is worried about the impact it will have on Nick and her husband Dylan [Steve Burton].  Will Sage haunt Sharon until the day it is revealed that Sully is Christian?

And, this reveal that Christian is alive will pave the way for truth to come out that Adam [Justin Hartley] is Christian’s father and Not Nick. So Y&R fans, are you hoping Sharon tells the truth before Nick finds out some other way? Do you think Sharon should pay for withholding the truth?  Let us know what you think in the comments below and don’t forget to check Soap Opera Spy for all of your ‘The Young And The Restless’ spoilers and news.