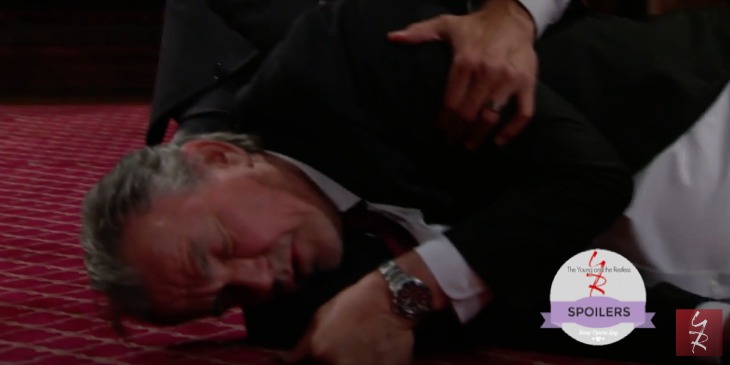 “The Young and the Restless” spoilers for Monday, July 4, tease that Phyllis (Gina Tognoni) will open up to Billy (Jason Thompson) about her feelings. At the cabin, Phyllis tells Billy she loves him and he lets her know he loves her, too. Billy wants to tell Jack (Peter Bergman) the truth so they can start a life together.

Phyllis sends Billy home so she can think about this alone. Billy seems confident that Phyllis will make the right choice. Later, Jack runs into Billy at the athletic club. They discuss Victor’s (Eric Braeden) ordeal and Jack thinks Billy should go be with Victoria (Amelia Heinle). Billy doesn’t feel like it’s his place to support Victoria anymore.

Jack asks if he can use Billy’s phone. He tries to call Phyllis, but she doesn’t pick up. Jack confesses that his marriage has been somewhat strained. Billy mentions Phyllis being drunk the night before and Jack wonders how he knows that. Billy covers up his blunder and Jack feels sure that everything will work out.

You Might Also Like —> Alyvia Alyn Lind Sings ‘Angel Hill’ With Dolly Parton During Dollywood Week – Watch It Here!

Back at the cabin, Phyllis is stunned when Ian (Ray Wise) rushes in with Nikki (Melody Thomas Scott). Ian ties them up and says he has great taste when it comes to hostages. Once Ian leaves the room, Nikki and Phyllis try to grab a phone.

Ian comes back and they do their best gain the upper hand. Phyllis fibs that she’ll shoot Nikki if Ian hands over the gun. Ian snickers about the whole situation. He’s obviously having a good time. Meanwhile, Victor bleeds at the courthouse and yells that Ian is to blame. He adds that Ian kidnapped Nikki.

Adam (Justin Hartley) bursts in with Chelsea (Melissa Claire Egan) and orders Victor not to die. He’s not done with him yet. Paul (Doug Davidson) hears the news about Ian and Nikki. Nearby, the paramedics arrive and Victor is loaded into an ambulance. Michael (Christian LeBlanc) and Christine (Laralee Bell) begin to argue about the trial. Paul accompanies Christine as they make their way over to the hospital.

At the penthouse, Adam rants about Victor messing with his head. Victor’s testimony certainly threw Adam for a loop. Dylan (Steve Burton) shows up and suggests that Adam helped Ian make his getaway. Chelsea and Adam insist their hands are clean. Dylan believes they at least provided the opportunity for Ian’s escape.

A short time later, Michael comes to get answers from Adam. Chelsea and Adam confess that they pretended they were going to help Ian, but it was all a sham. Michael fears that move could cost Adam his freedom.

Other “Young and the Restless” spoilers reveal that Kevin (Greg Rikaart) will grill Sharon (Sharon Case) about Mariah’s (Camryn Grimes) injuries. At home, Sharon says she didn’t mean to hit Mariah. She just had to get rid of “her.” Kevin wants to know who Sharon is referring to. He blasts Sharon for striking Mariah and prepares to call 911.

Suddenly, Mariah wakes up and Sharon runs to grab some ice. Mariah hints that Sharon is in bad shape. Her delusions are taking over. Kevin and Mariah agree to lie for Sharon’s sake. When Sharon returns, they suggest Mariah could have a concussion and needs to be checked out by a doctor. They talk Sharon into coming along.

At the hospital, Victoria and Nick (Joshua Morrow) mull over the shooting and Victor’s condition. Nick is more concerned about Nikki. In Victor’s room, Meredith (Alicia Coppola) wants to know why he said she lied. Victor contends that he was trying to save Adam.

Once Nick and Victoria come in, Victor claims they should hold Adam responsible for all of this. Victor talks about taking a bullet for Nikki and doing everything for his family. Meredith looks thoughtful. Nearby, Kevin and Mariah approach a doctor they called. When Sharon realizes the doc is for her, she’s upset by Mariah and Kevin’s deception.

The doctor urges Sharon to take her medications or she’ll have to be sedated. Later, Dylan learns Sharon has been admitted. He questions Mariah and she lies that Sharon had a panic attack. She claims the courthouse shooting was too upsetting.

Dylan goes to speak with Sharon and Kevin scolds Mariah for lying. Mariah points out that Sharon was trying to whack Sage. Y&R rumors hint that Sharon’s problems are far from over. Exciting twists are in the works. Stick with the CBS soap for updates on the chaos ahead.

‘The Bold and the Beautiful’ POLL: Are Eric and Quinn Hot or Gross Together? VOTE!