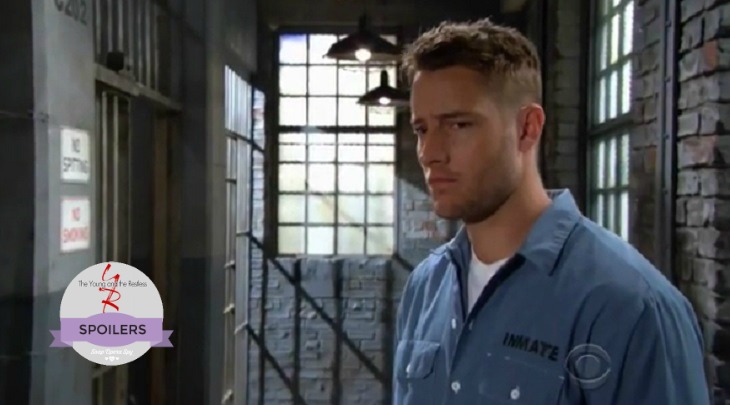 Flash-forward scenes projected a future that will likely never be seen on ‘The Young and the Restless’. Adam (Justin Hartley) endured a sequential nightmare that presented a version of his perceived future. Initially encouraging, he had been freed from prison, after only 20 years, and was taken home by his son. But, Chelsea’s (Melissa Claire Egan) expiration before his eyes and the bitter comments about Victor’s (Eric Braeden) past death spooked the present day man who’s been forced to reside in Wisconsin’s Walworth State Prison.

Eerie is one word that can be used to describe the mood projected through Adam’s dreams on ‘The Young and the Restless’. It was 2036 and an adult Connor arrived at the prison to pick up his dad. Upon returning home to the penthouse, Adam immediately went to Chelsea’s bedside. Both cast members were nicely aged by Patti Denney and her Y&R makeup staff, as each fronted grayed hair and realistically worn faces.

Longtime fans may have flashed back to the passing of Adam’s mother, Hope (Signy Coleman), which was shown in 2008. That sad death resulted via the ravages of pancreatic cancer. However, in this conjured instance, Connor blamed Adam for having pushed Chelsea into an early grave through worry. She apparently spent the last two decades consumed with Adam’s imprisonment.

Later, during this subconscious projection, Adam sat in the famed Newman Towers’ executive suite. With all furnishings covered in sheets only one iconic image stood out, the egocentric portrait of Victor Newman. Adam wished he could have been present when his father died at some undefined earlier point, so he could have laughed as his casket was lowered into the ground. Then, Victor, Jr. kicked the old man right in the painted face, permanently destroying the ancient canvas.

Fans of ‘The Young and the Restless’ strongly suspect that this daytime drama and the remaining three sudsers won’t be alive twenty years from now, due ongoing changes within the entertainment culture. The major broadcast networks that have featured this genre for decades are likely to offer alternative offerings in the near future. But, for however long this iconic soap endures, solid actors like Hartley, Egan and others will continue delivering engaging performances that transcend the times in which they work.