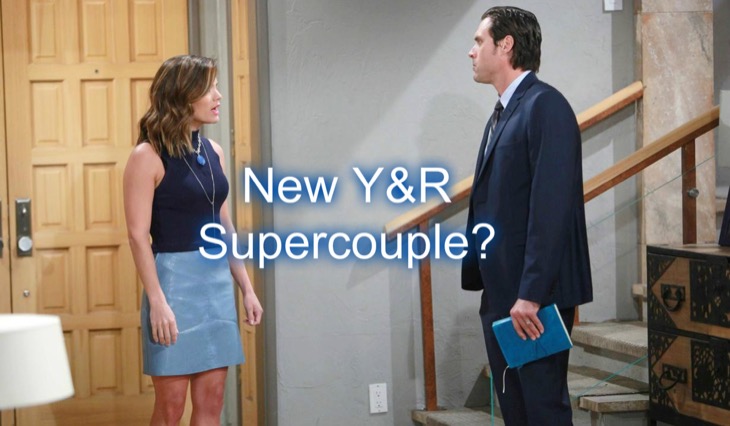 Adam (Justin Hartley) is presumed dead, again, on ‘The Young and the Restless’. And with his apparent demise, wink, ‘Chadam’ has been torn apart. Now Chelsea (Melissa Claire Egan) and Nick (Joshua Morrow) are in position to form Y&R’s next power couple, ‘Chick’.

Chelsea just couldn’t get Adam out of her system. So much so that she coupled with Gabriel Bingham (Justin Hartley) when he mysteriously arrived in town via Sage’s (Kelly Sullivan) pressured assistance. Chelsea’s otherworldly instincts proved apt, as Gabe was actually Adam inside.

Adam revealed who he was to Victor’s (Eric Braeden) eerie oil-painted portrait that hangs on a prominent wall inside Newman Towers’ executive office. He didn’t know that Chelsea had just walked in and so his ruse was exposed. Fast-forward through Sage delivering Nick’s son Christian (who’s actually Adam’s biological child) to a tragic car accident spurned by another Sharon (Sharon Case) baby secret.

Sage’s death oddly enabled Victor to frame Adam for the invented murder of Constance Bingham (Sally Kellerman). The ‘Moustache’ employed the worst possible judgment when he used Chloe (Elizabeth Hendrickson) to help him punish Adam. Chloe first went off the rails by withholding Sage’s real diary pages, which put Adam in prison. But, then she went an infinite step further.

Skip ahead to Chelsea, Nick and Connor (Gunner and Ryder Gadbois) approaching the woodsy cabin where Adam was waiting to be picked up. Agreeing to Victor’s master plan, which actually was genuine, ‘Chadam’ believed they were going to escape justice, establish new identities and live elsewhere indefinitely.

Chelsea steps out of Nick’s SUV when she’s unable to reach Adam by phone. She approaches the suspect abode. Boom! The Adam character is written off the show, for however long this time, through another explosion. Is he hurt, dead, alive? Will Hartley return after his NBC obligation ends? Has Adam’s face been burned beyond recognition, which could enable Michael Muhney to reclaim his old role, or will another actor be cast in this key part? As those questions wait to be answered, viewers know that Adam is believed to be dead again, while ‘Chick’ seems likely to be born.

‘Days Of Our Lives’ News: George DelHoyo Dishes On Coming Back As Orpheus

‘The Bold and the Beautiful’ Spoilers: Wyatt Desperate To Save Marriage, How Far Is He Willing To Go?