‘The Young and the Restless’ POLL: Has the Brain Tumor Changed Your View of Max? VOTE! 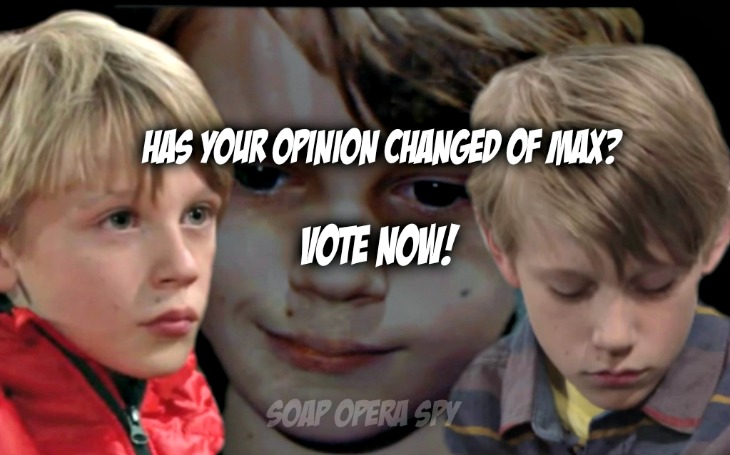 “The Young and the Restless” viewers watched a very twisted storyline play out as Max (Jared Breeze) plotted the murder of his own baby sister. He wouldn’t have minded taking Abby (Melissa Ordway) out either. Y&R fans were convinced this kid was a cold-hearted killer, but the show’s latest curveball made everyone question Max’s guilt.

After several tests, Stitch (Sean Carrigan) learned that his son was suffering from a brain tumor. The tumor has apparently caused Max to have dangerous thoughts and that led to his streak of bad behavior. Now that we know all of the facts, we want to hear what you think about this wayward child. Has your view of Max changed in light of the brain tumor news?

It’s hard to blame Max for something that was beyond his control. If a brain tumor was truly what caused his deadly actions, then removing it should rectify his behavior in the future. Nevertheless, it might be tough for “Young and the Restless” watchers to forget about what Max has done. Even though it wasn’t Max’s fault, his past could affect how people look at him moving forward.

Of course, that could be the case in Genoa City as well. It might be something that the show wants to explore later on. Like viewers at home, some of the town’s residents may embrace a new-and-improved Max with open arms. Others may be hesitant to trust him. After all, we can’t know for sure that the tumor was the only cause of Max’s issues.

If Max survives and recovers from the surgery, he’ll have a chance to prove he’s been cured of his evil mindset. It’s worth mentioning that the surgery itself might make fans more sympathetic to Max. Stitch told his son that the surgery came with some risks, but Max was still on board with the procedure. He doesn’t want to cause so much death and destruction anymore. It seems like Max is really trying to turn things around.

Is your view of Max shifting? Has the brain tumor changed your opinion of Max and his horrible acts? Vote in our Y&R poll and don’t forget to check Soap Opera Spy often for the latest “Young and the Restless” spoilers, rumors, updates and news.

‘Devious Maids’ Spoilers: Did Spence Kill Peri, Or Is He Being Framed?

‘Days of Our Lives’ POLL: Is a Chad and Ciara Pairing Hot or Gross? Vote in Our Awkward Couple Poll!