‘The Young and the Restless’ POLL: Are You on Team Jack or Team Phyllis? VOTE! 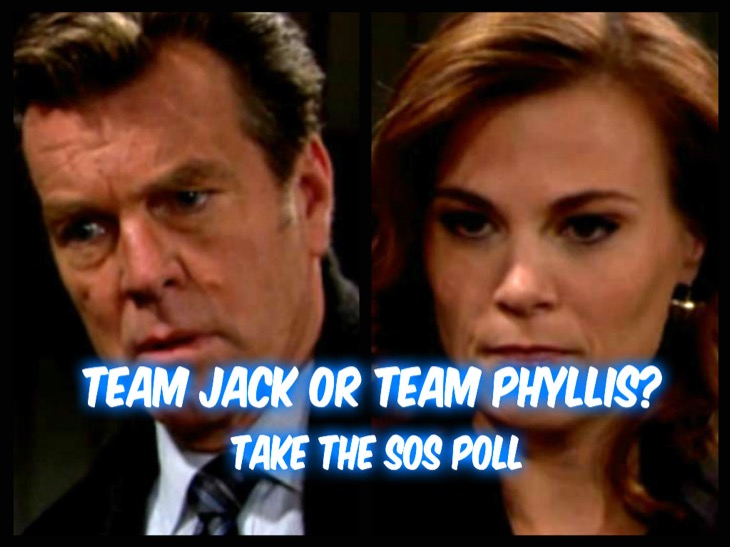 “The Young and the Restless” fans know that Phyllis (Gina Tognoni) messed up big time. As a result, Jack (Peter Bergman) can barely stand to look at her. He just wants Phyllis out of his life, but she’s not giving up without a fight. Of course, Phyllis is going to have trouble winning Jack over after everything she’s done.

Phyllis cheated on Jack with his own brother. It doesn’t get much lower than that. To make matters worse, Phyllis is treating Billy (Jason Thompson) like yesterday’s news. Why did Phyllis bother if Jack was the one she really wanted? It seems Phyllis didn’t know what she had until it was gone.

To be fair, Phyllis is at least trying to turn things around. Maybe that should count for something. Fighting for Jack is probably better than parading around town with Billy on her arm. Still, Phyllis has caused major strife for the Abbott family and it’s going to take a while to repair the damage.

Phyllis acts like Jack should just forgive her and let it go, but it’s not that easy. Jack has been deeply hurt. Even if Phyllis manages to get a second chance, this pain is sure to linger. Jack may never fully recover from the blow.

On the other hand, some Y&R viewers may not be on board with Jack’s new attitude. It might be warranted, but that doesn’t mean it’s pleasant. Jack is having explosive outbursts and he’s plotting revenge. This definitely isn’t the kind and level-headed Jack we’ve grown to love. Jack is so angry that he can barely think straight.

Again, Jack’s feelings are completely understandable. However, that doesn’t mean you have to enjoy watching Jack’s wrath. Perhaps you prefer the sweeter side of his character. If so, you might be rooting for Phyllis to win just so Jack can get back to normal.

Regardless, “The Young and the Restless” spoilers hint that there’s still hope for this couple. Like it or not, a reunion could happen. Phyllis will soon make a move that could score her some points with Jack. Y&R rumors suggest that it could mean causing problems for herself and others, but Phyllis is willing to do whatever it takes.

‘The Bold and the Beautiful’ Spoilers: Heartbreak Continues for Quinn, Wyatt Backs Up Steffy – Caroline Delivers Stunning News to Thomas

‘The Bold and the Beautiful’ POLL: Are You on Team Quinn or Team Ridge? VOTE!