‘The Bold and the Beautiful’ POLL: Are You on Team Quinn or Team Ridge? VOTE! 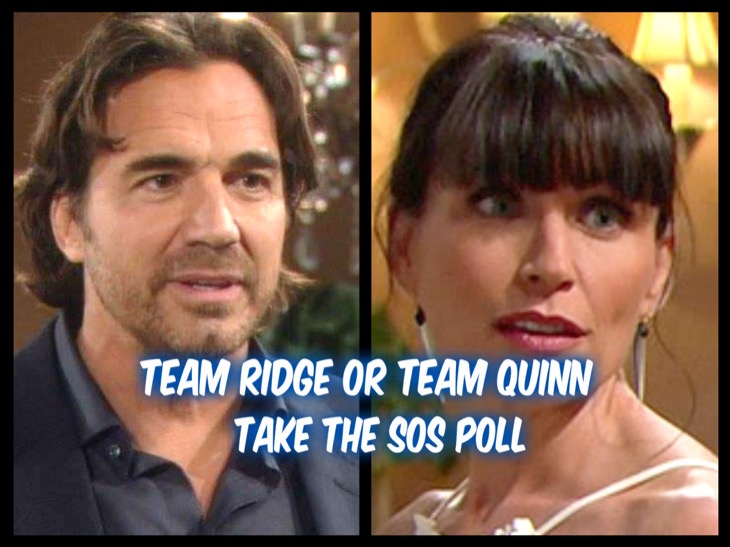 “The Bold and the Beautiful” spoilers reveal that a fierce battle is heating up. Ridge (Thorsten Kaye) is determined to get rid of Quinn (Rena Sofer) once and for all, but she’s not going down without a fight. Quinn loves Eric (John McCook) and she isn’t going to let Ridge stand in her way.

Of course, “The Bold and the Beautiful” viewers have strong opinions on Quinn and what she deserves. How you feel about Ridge is undoubtedly a factor here, too. Whose side are you on in this war? Let’s take a look at this situation from every angle so you can pick your team.

First, we have Quinn. She’s got a horrible past and she was never truly punished for her mistakes. Quinn got off scot-free after she duped Liam (Scott Clifton) and made Steffy’s (Jacqueline MacInnes Wood) life miserable. Things worked out well for Wyatt (Darin Brooks) initially, but now he’s also paying the price.

While her victims suffer, Quinn has been enjoying Eric’s love. That doesn’t seem very fair. On the other hand, B&B fans know Ridge isn’t much better than Quinn these days. If Katie (Heather Tom) hadn’t caused trouble, Ridge would probably still be lying about Douglas. He didn’t care about doing the right thing. Ridge was willing to keep Thomas (Pierson Fode) away from his own son for mostly selfish reasons.

We have to consider Eric’s view in all of this. The Forresters hated the fact that Eric got involved with Quinn, but that was his choice to make. Ridge has been acting like Eric is incapable of making his own decisions. He’s treating Eric like his child instead of his father.

Even after Eric collapsed, Ridge refused to back down from his position. He still believes Quinn is the root of all their problems. Ridge can’t see his own faults. At least Quinn has apologized for her old attitude. She’s trying to be a better person and has pushed for peace within the Forrester family.

Quinn was willing to put aside her own desires and back out of this marriage. Eric wouldn’t let her do it, but the selfless gesture said a lot about her new-and-improved mindset. Quinn has really grown as a “Bold and the Beautiful” character, but can we say the same about Ridge?

Nevertheless, maybe you think Quinn just hasn’t received what she has coming yet. This is tricky and that’s why we want to hear your thoughts. Are you on “Team Quinn” or “Team Ridge”?

We’ll give you updates as more news comes in on this hot plot. In the meantime, vote in our B&B poll and don’t forget to check Soap Opera Spy often for the latest “Bold and the Beautiful” spoilers, rumors, updates and news.

‘The Young and the Restless’ POLL: Are You on Team Jack or Team Phyllis? VOTE!

‘Days Of Our Lives’ Spoilers: Hope And Rafe Break-up Courtesy Of Aiden – ‘DOOL’ Couple Not Meant To Be?