‘The Young and The Restless’ Poll: Who Was The Best Adam Newman – Justin Hartley or Michael Muhney? VOTE! 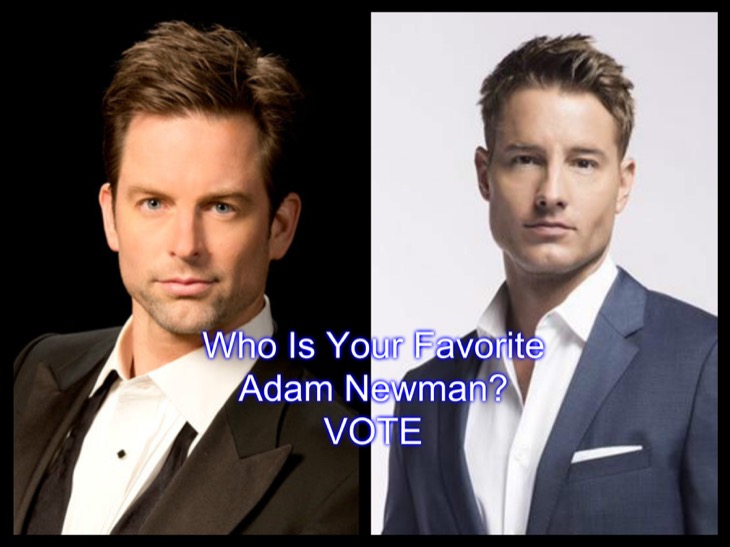 For some fiercely loyal fans of ‘The Young and the Restless’, this poll is blasphemy. For others, it’s purely a hoot. So, as Justin Hartley enters a period that could spell the end of his daytime run, it’s fair to ask a question. Who was the best Adam Newman, Hartley or Michael Muhney?

Muhney burst onto the scene at ‘The Young and the Restless’ in 2009. He quickly turned a role that Chris Engen held for approximately a year (2008-2009), into prime daytime viewing. His interplay with Eric Braeden (Victor), in particular, was unlike any foil the great man faced before or since. Jack’s battles with the ‘Moustache’ were legendary. But, this was Victor, Junior, the man’s own son, who was verbally jabbing at “Pops”. And, elements within those scripts surely seemed to be ad-libbed consistently.

Behind-the-scenes battles between both actors were never fully confirmed. After his unexpected departure in 2014, Muhney admitted that his own ego had likely been his undoing. However, like any genius, reckless behavior is purely one vehicle through which greatness flows. Such talent doesn’t excuse all behavior, but does help to explain it. Anything is possible in Hollywood land. So, dismissing the chance that Muhney could reprise his role on Y&R wouldn’t seem wise.

Fans of The Young and the Restless waited for every instance, especially those shown in his later years, to see how Muhney’s version of Adam would take control of most scenes. His electric efforts clearly raised the game of each actor he appeared with. While still unconfirmed rumors regarding Muhney did affect the perceptions of some viewers, wide swaths of the audience place him with the best actors who ever plied their trade on this iconic steamer.

Soap opera fans commit to year-round viewing schedules for a reason. They love this brand of escapist entertainment. When ‘The Young and the Restless’ recast the role Muhney owned, viewers wondered it they’d be able to root for a new Adam. Y&R deserves full credit for choosing an actor who delivered.

Creating his own mood, Hartley proved to be one of the better replacements in recent daytime history. He wisely chose not to attempt a leap over the high bar Muhney crossed with ease. Instead, Hartley offered a more nuanced, less frenetic, element within Adam to a discerning audience.

How long, of if, Hartley remains on Y&R is unknown due to factors involving his new NBC show ‘This Is Us’. If Hartley does exit, fans won’t simply compare his replacement to Muhney. Instead, the work of both men will have established expectations. Considering that Hartley has been employed for less than half the time Muhney was, that expected assessment will reflect high praise.

Fans of ‘The Young and the Restless’ rightfully express their opinions on a regular basis. So, who played Adam Newman better, Justin Hartley or Michael Muhney? Vote in our poll below!

‘General Hospital’ Spoilers Week Of August 29 – Sept 2: The Power Goes Out – Killer Strikes Again – Alexis Spirals – An Arrest is Made!

‘Days Of Our Lives’ Spoilers: After Aiden Appointed The DA – Hope Wants To Quit The Police Force