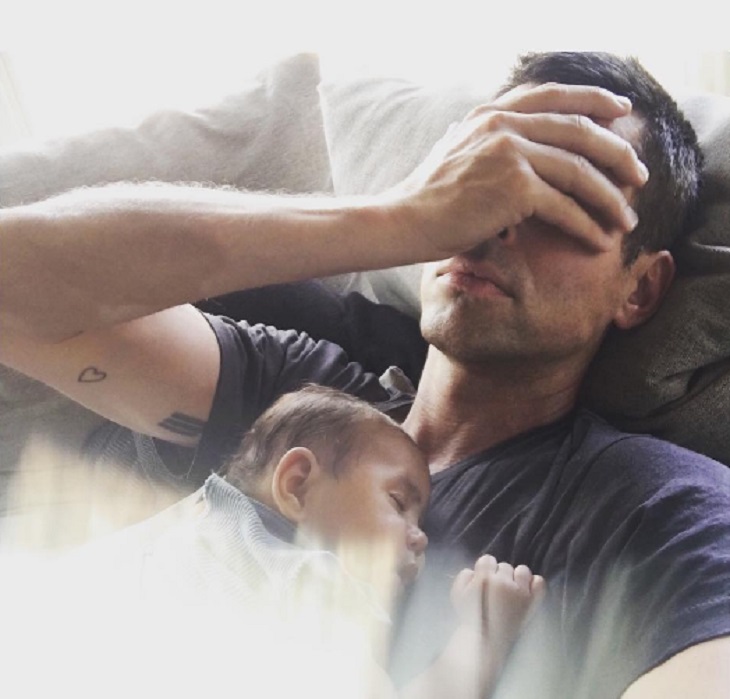 He once played a smooth-talking doctor, so is it any surprise that Jason Thompson (Billy Abbott, The Young and the Restless, ex Patrick Drake, General Hospital), has an excellent bedside manner? His son, Bowie is proof positive!

Check out Thompson’s super-cute baby Bowie as he swings off to slumber land in this Instagram pic.  “Shhh. Back to work,” wrote Thompson, no doubt proud of his baby-soothing abilities. Thompson’s fans are in agreement on his daddy-duty prowess.

Related: Adam and Chelsea at Odds Over Chloe – Victor and Phyllis Become Allies – Lovesick Kevin Has a Plan

Little Bowie was born to Thompson and his wife, Paloma, in May.

If I concentrate..really hard, a nice cold #MillerLite may appear to kick off our Friday. Because little man knows, what once was my chest is know his pillow to rest. #BowieBanjo

But, luckily for soap fans, Thompson wasn’t gone long from their TV screens. He took over the Y&R role of Billy Abbott (formerly portrayed by Billy Miller, now Jason Morgan, GH) soon after departing GH.  His first appearance on Y&R was in January.

Related: Chloe Blackmails Victor Newman – Will She Send Adam’s Dad Back To Prison?

With his soap switch, Thompson transitioned from playing a loyal family man to portraying a complex playboy. Y&R fans have watched Billy and Phyllis (Gina Tognoni) go from a slow burn to conflagration. Problem is, Phyllis is also his sister-in law. And, she delivers a mean face slap as Billy found out this week, when she punctuated her, “No!” with a right hook.