‘The Young And The Restless’ News: Colin And Jill’s Reunion Pays Homage To Katherine And Rex 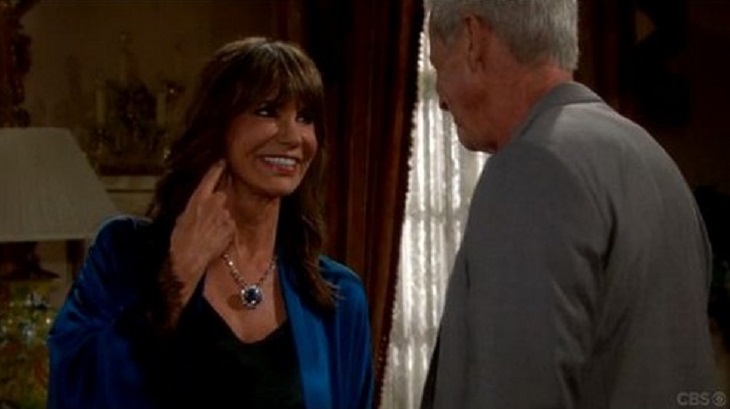 Power couple names weren’t in style when Katherine (Jeanne Cooper) and Rex (Quinn Redeker) were seen on ‘The Young and the Restless’. But, if they were ‘K-Rex’ might have been their hashtag line. However, Colin’s (Tristan Rogers) return to Genoa City and reunification with Jill (Jess Walton) does revive ‘Jillin’. And, this particular pairing often evokes fond memories of Cooper’s run with Redeker.

Famed storylines on ‘The Young and the Restless‘ in the 1970’s and 1980’s included Katherine’s many travails. Using the fabled mansion as a home base, she experienced deep romantic connections. The head of Chancellor Industries, Phillip Chancellor II (portrayed by John Considine and Donnelly Rhodes), was her husband, until Jill stole him from her (according to Katherine). Jill was a manicurist and hairdresser until she became Mrs. C’s paid companion.

Katherine had serious problems with alcohol, which served to alienate Phillip II. Then, during that dramatic period, Jill (previously played by Brenda Dickson and Deborah Adair) and fate intervened. Phillip formed a relationship with Jill, who had his baby, Phillip III (Thom Bierdz), and divorced Katherine. Awhile thereafter, Katherine gave her ex-husband a ride in her car while under the influence. When Phillip II rejected his ex-wife’s plea to reunite, Katherine drove her car over a cliff. He ex-husband died, but not before marrying Jill in the hospital.

Years later Jill found a con man, Rex, on a park bench. She paid him to become involved with Katherine, not knowing that he was really Brian Romalotti, who was the father of Danny (Michael Damian) and Gina (Patty Weaver). Unexpected developments saw Katherine and Rex actually fall in love. Countless scenes on ‘The Young and the Restless‘ between Redeker and Cooper provided iconic daytime memories.

While the past can never be regained, Jill’s paring with Colin does wink at ‘T-Rex’. Walton and Rogers possess the needed acting chops to continue to make a positive impact on Y&R indefinitely. Serving as each other’s match, ‘Jillin’ often provides needed comic relief during other serious arcs, just as Katherine and Rex once did.

Soap Opera Spy is a leading source for everything linked to ‘The Young and the Restless.’