The Walking Dead POLL: Who Will Negan Kill In ‘TWD’ Season 7 Premiere? VOTE! 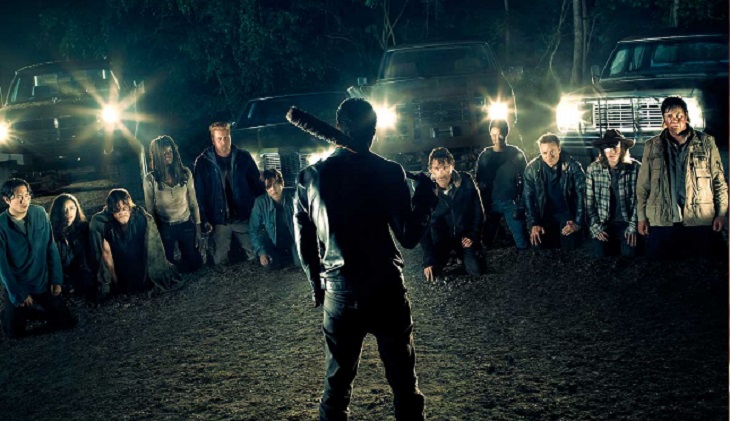 The Walking Dead (TWD) fans have been speculating since the second Season 6 ended about who meets their fate at the hands of Negan’s (Jeffrey Dean Morgan) barb-wired bat, Lucille.  The last we see of our beloved group of survivors, most of them are on their knees waiting for their fate. Take the poll, and let us know who you think his victim will be?

Rick Grimes (Andrew Lincoln) could be the number one possibility because Negan has to be in complete control, and unless Rick submits to him and follows all his rules, there is no chance Rick could remain free because his group of survivors and friends would remain loyal to him only, but according to teasers of season 7, we see Rick in the footage, so maybe it isn’t him.

Glenn Rhee (Steven Yeun) is another possibility.  If TWD is going to follow the scenes in the comic books, then Glenn would be the one to die at this point, but we must keep in mind that showrunner, Robert Kirkman had strongly hinted he wanted to separate from the comics and original material.

Carl Grimes (Chandler Riggs) may be on the top of his ‘kill list’ simply because it will break Rick.  But again, Carl would be an odd choice.  Negan needs strong people to follow him and help him maintain the community he has built, but as it stands, Negan probably views Carl as one of the weaker ones in the group, and less likely to defy him.

Beloved Daryl Dixon (Norman Reedus) was not among the ones initially on the ground, but since we are looking for the shock factor here, he may be the one who meets his fate on the season 7 premiere.  Daryl is a bit of a wild card here, he is not a character in the comic books, but he is one of the most popular survivors in the TV series.  Daryl is a loner of sorts, and in not one to conform to another’s way of thinking.

Military man, Abraham Ford (Michael Cudlitz) is next on the list.  He is by far the strongest and biggest members of the original group of survivors.  He could be the biggest threat to Negan at this point.  His character has already died by this point in the comics, and his death will really effect Rosita; and maybe Negan doesn’t realize that she isn’t the weak woman he thinks she is.

Last person we can think of is Maggie Greene (Lauren Cohan) who is dire straits already.  She is pregnant, very sick and feels something is wrong with the baby.  In the Season 7 trailer, you can see that the blood and guts from the beating are on Rick’s right side, where Maggie was.  Who would put it past Negan to kill a pregnant woman to get his point across about him being the one in charge?

Please take the poll and choose who you think is likely to meet their death at Negan’s hands and be sure to watch The Walking Dead’s Season 7 premiere on Sunday, October 23, 2016 at 9 p.m. ET and check Soap Opera Spy often for updates, news, rumors and spoilers!

‘General Hospital’ Spoilers: Maxie Is Running Out Of Time, Will Nathan Find Her Before It’s Too Late?