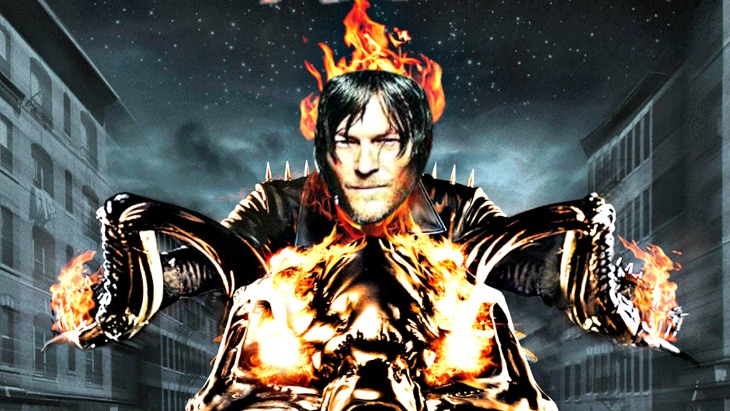 ‘The Walking Dead’ (TWD) Norman Reedus reveals that he would love to play Ghost Rider, and invited Marvel to contact him about the role. The plus is the fan favorite has a motorcycle and seems to able to maneuver just fine on the two wheeler. And, let’s be honest, that’s a definite plus for this particular role.

“Hell yeah. It would be a blast. Do I get a skull face that is on fire and all the stuff? F**k Yeah, I’m down for that,” Norman told IGN.

Reedus added that he was a HUGE fan of Nicolas Cage’s portrayal of the Marvel anti-hero.

In 2013, Marvel bought the movie rights to Ghost Rider, but the executives said there are no plans currently to bring the character back to the big screen.

On Sunday, Ride With Norman Reedus premieres on AMC, and he is in the middle of filming The Walking Dead Season 7. When asked if he could reveal any details about the Season 6 cliffhanger episode, he said the fans will have to wait until October.

Norman has a pretty busy schedule, and finding the time for Ghost Rider might be a difficult task, Comic Book reports. The word on the Internet is Ghost Rider could be picked up by Netflix as a series in 2017. There’s no confirmation if the streaming company plans to reboot the series or not, but with Norman putting his name out there to be placed in the hat of possible actors for the lead actor role, should they decide to start filming, adds more fuel to rumors.

Would you like to see Norman Reedus as Ghost Rider? Do you think he could find the time for another series if he were cast in the role? Would you watch the series? Stick with Soap Opera Spy for all you’re the Walking Dead (TWD) spoilers, news, and updates.

‘The Bold And The Beautiful’ Spoilers: Sasha’s Ultimatum – Will She Give Up Zende To Be A Member Of The Avant Family