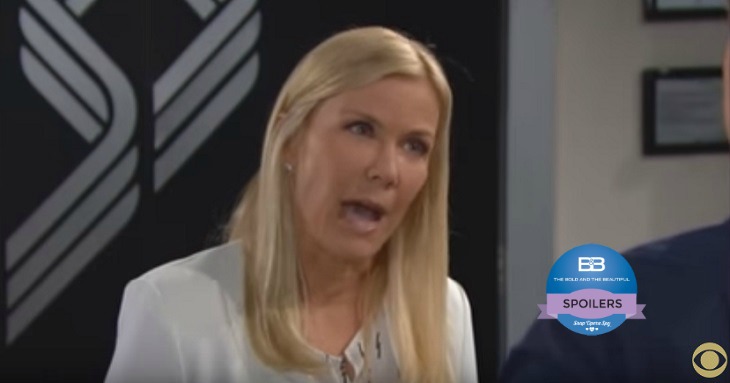 “The Bold and the Beautiful” spoilers for Thursday, July 21, tease that Brooke (Katherine Kelly Lang) will go up against Bill (Don Diamont). She’ll lash out at him for taking Will (Zane Achor) away from his mother. Brooke will declare that it’s wrong and she simply won’t allow it. Katie (Heather Tom) deserves to take care of her son.

After Brooke scolds Bill for his actions, Katie will show up looking for answers. She’ll demand to know where Will is. Katie won’t want to go a moment longer without Will in her life. It’s clear that this whole ordeal has been very stressful for Katie.

Bill will stand his ground, but Brooke will quickly reiterate that she’s not going to let this happen. Initially, Katie won’t be pleased with Brooke’s intervention. She’ll think Brooke has done enough already.

Related: Quinn Back To Her Scheming Ways, Prepares For Monte Carlo – Eric Forrester In Trouble?

Brooke’s feelings for Bill led to the destruction of her sister’s family, so Katie is understandably bitter. The majority of the blame is on Bill for making the decision to cheat, but it takes two to tango. Brooke’s betrayal is a blow that Katie won’t get over anytime soon.

Nevertheless, Brooke will insist that she’s going to fix this. She’ll be right by Katie’s side as they tell Bill he’s making a huge mistake. “The Bold and the Beautiful” spoilers indicate that things will get heated, but Brooke will do her best to keep the confrontation under control.

Other B&B spoilers reveal that Wyatt (Darin Brooks) will try to get through to Quinn (Rena Sofer). Steffy (Jacqueline MacInnes Wood) doesn’t like having her mother-in-law anywhere near her, but Quinn just can’t seem to grasp that. Wyatt will wonder why Quinn felt the need to dress up as a Russian guy and sneak into Forrester Creations.

Related: Does Quinn Genuinely Care For Eric, Or Is Their Affair A Result Of Her Mental Illness? VOTE!

Quinn will argue that she couldn’t just waltz in without a disguise. They wouldn’t have given her access. Wyatt will suggest that’s the point. Quinn isn’t wanted there and she should back off. Of course, Wyatt doesn’t know that Quinn has been hitting the sheets with the CEO.

Speaking of the CEO, Eric (John McCook) will receive a tempting offer now that he’s back in the position. “The Bold and the Beautiful” spoilers say Wyatt and Steffy will ask Eric to join them at the Spencer Summit. They’ll hope that Eric will be the guest speaker for the event.

Eric will go along with the idea, but B&B rumors hint that he may end up regretting that choice. Quinn is about to cause big trouble! We’ll give you updates as more news emerges. Stay tuned and don’t forget to check Soap Opera Spy often for the latest “Bold and the Beautiful” spoilers, rumors, updates and news.

‘General Hospital’ Spoilers: New Super Couple In The Works – Could Nikolas & Ava Be The Most Powerful Duo Ever?