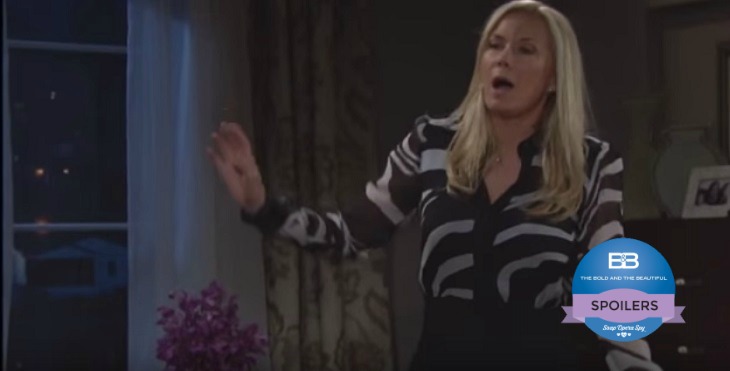 “The Bold and the Beautiful” spoilers for Friday, May 20, tease that Katie (Heather Tom) will flip out over Brooke’s (Katherine Kelly Lang) surprise appearance. She’ll want to know what Brooke is doing in her bedroom. Brooke will state that she’s leaving, but Katie won’t let her go without an explanation. She’ll suspect that Brooke may have been trying to seduce Bill (Don Diamont).

Brooke will clarify why she was there and how she ended up under the bed. Katie will admit that the story makes sense, but the whole situation will make her uneasy. It seems like Brooke always manages to insert herself into Bill’s love life. Katie may fear that Brooke has some sort of obsession. There’s a good chance this won’t be the last time Katie will find herself questioning Brooke’s motives.

Meanwhile, Zende (Rome Flynn) will once again tell Nicole (Reign Edwards) how much he cares about her. He’ll indicate that he’s in awe of Nicole and would do anything to have her back. It looks like Nicole will be happy to give Zende another shot, but he’ll admit there’s a problem. “The Bold and the Beautiful” spoilers say Nicole will be stunned when Zende confesses that Sasha (Felisha Cooper) is pregnant.

Elsewhere, Julius (Obba Babatunde) will also hear the big news and he’ll be pretty skeptical about it. Sasha will insist that it’s true and she’ll feel like sharing a child with Zende will bring them closer. Julius will think Sasha needs to let this go. He’ll believe Nicole and Zende have an opportunity to reunite now that the surrogacy isn’t standing in the way.

Related: Is Thomas Really Douglas’ Brother After All – Could Ridge Be Baby’s Father?

Sasha will suggest that she can win Zende over, but that may not be the case. A baby for Sasha wouldn’t necessarily be a deal-breaker for Zende and Nicole. B&B spoilers reveal that Zende will soon announce that he’s getting back together with Nicole anyway. If Sasha is really expecting, Zende will probably vow to step up as a father. However, his romance with Sasha is officially ending.

Of course, Sasha will be asked to prove she’s pregnant. That may trip Sasha up if she’s been fibbing, but the rumors say she could have a trick or two up her sleeve. Stick with “The Bold and the Beautiful” for updates on Sasha’s next move.

So B&B fans, what do you think about Katie’s beef with Brooke? Will things settle down or will the rift widen? Can Sasha figure out how to keep Zende or is she destined to fail? Voice your opinion in the comments below and don’t forget to check Soap Opera Spy often for the latest “Bold and the Beautiful” spoilers, rumors, updates and news.

‘The Bold And The Beautiful’ Spoilers: Is Thomas Really Douglas’ Brother After All – Could Ridge Be Baby’s Father?