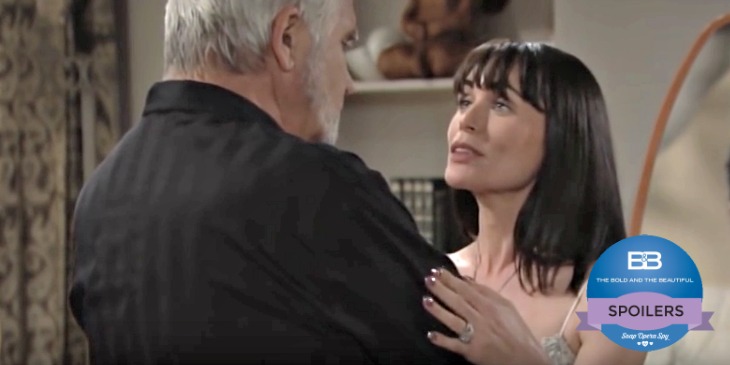 “The Bold and the Beautiful” spoilers for Tuesday, September 27, tease that Eric (John McCook) will still have his family’s betrayal on his mind. This transgression won’t be easily forgotten. Quinn (Rena Sofer) will hope to help Eric deal with this tough blow. She just wants her husband to feel loved and happy.

Tuesday’s B&B preview video shows Quinn saying, “They were trying to protect you…so we have to show them that there was no need for that.” Eric won’t look convinced that this was all about protection. He feels like the rest of the Forresters don’t think he’s capable of making sound decisions. Eric trusts Quinn and he believes his family members should accept that.

Elsewhere, Rick (Jacob Young) will state that they made a huge mistake. He’ll suggest that the backlash could be brutal. It’s not like their wedding boycott helped anyway. Eric was determined to marry Quinn and now they’ve all angered him.

Rick and some of the others will assume that trouble is brewing, but Ridge (Thorsten Kaye) and Steffy (Jacqueline MacInnes Wood) won’t care. They’ll maintain that they had to make Eric understand their concern. Furthermore, Steffy and Ridge will refuse to give up on pushing Quinn out of the picture.

“The Bold and the Beautiful” spoilers say Eric will call for a meeting with all of the traitors. He’ll order Pam (Alley Mills) to round everyone up right now. Eric is ready to unleash his wrath and it’s not going to be pretty. In fact, the confrontation will lead to Eric’s collapse later this week.

In the meantime, Quinn will try to get through to Wyatt (Darin Brooks). She’ll want her son to realize that what she shares with Eric is the real deal. It’s the only reason Quinn is willing to put Wyatt’s marriage and happiness in jeopardy.

Wyatt will probably see that Quinn’s motives are pure, but he’ll stand by his decision to skip the wedding. Steffy would’ve been outraged and that’s the last thing Wyatt needs. Quinn will get why Wyatt chose to put his spouse first. Now that Quinn is a married woman, she plans on making Eric her top priority.

Unfortunately, the marriage news will just cause additional drama for Steffy and Wyatt. They’ll be at odds over what the future holds for Quinn and Eric. “The Bold and the Beautiful” rumors hint that the strife will continue as Wyatt voices more support for Quinn. Stay tuned to see if Steffy will start leaning toward divorce.

There’s tension everywhere on the CBS soap. We’ll give you updates as other details come in. Stick with B&B and don’t forget to check Soap Opera Spy often for the latest “Bold and the Beautiful” spoilers, rumors, updates and news.

‘The Young and the Restless’ Spoilers: Mariah Panics Over Missing Faith – Chelsea Gets a Surprising Request – Phyllis Sticks to the Plan