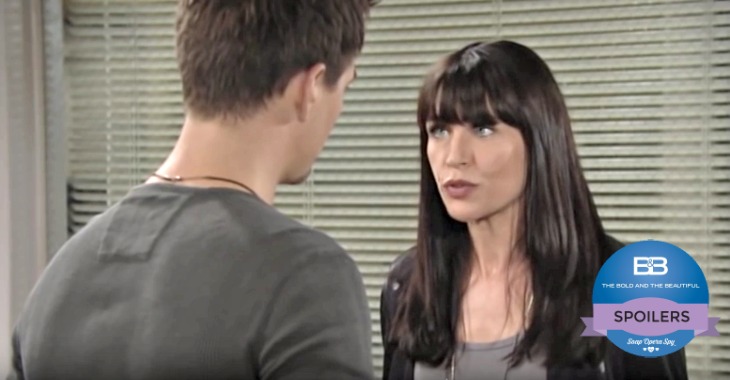 “The Bold and the Beautiful” spoilers for Wednesday, October 5, tease that Quinn (Rena Sofer) will be furious with Ridge (Thorsten Kaye) for trying to get rid of her. She’ll inform Wyatt (Darin Brooks) that she’s no longer welcome at the mansion. Quinn will say Ridge is threatening to push her out of Eric’s (John McCook) life once and for all. She just wants to love and support Eric, but Ridge won’t allow it.

Nevertheless, Quinn isn’t a quitter. She won’t let Ridge stop her from keeping the promise she made to Eric. Wednesday’s preview video shows Quinn stating, “I made a vow to protect Eric always and that’s exactly what I’m going to do…even if it’s from his own family.”

Wyatt will try to be encouraging, but he’ll also know that Quinn needs to keep her feelings under control. Things can get crazy when Quinn gets all worked up. Still, B&B fans can expect Wyatt to remain in Quinn’s corner as she focuses on the task at hand. There are additional blows ahead for Quinn, but Wyatt will step up to help his mom.

Elsewhere, Pam (Alley Mills) will continue to struggle with guilt. She’ll regret that she abandoned Eric on his wedding day. Pam will fear that Eric isn’t really aware of how grateful she is. “The Bold and the Beautiful” spoilers reveal that Pam will approach Eric’s bedside to deliver an emotional speech.

The preview clip shows a weepy Pam saying, “I hope you know how much I appreciate you, Eric. I appreciate everything you’ve done for me.” Eric’s medical crisis has hit his loved ones pretty hard. They’re responding in different ways, but they all want Eric to make a full recovery.

Of course, major changes are coming once Eric gets better. The Forresters need to proceed with caution while Eric is incapacitated. Ridge certainly doesn’t seem to be thinking about the big picture. He’s planning on disregarding Eric’s wishes and hiding the fact that Quinn’s name is on the power of attorney form.

You Might Also Like —> Ridge Wants Rid of Nightmare, Quinn Vows to Fight for Love – Brooke Takes Stand for Eric

Eric won’t be happy when he wakes up and finds out what’s been going on. It sounds like even more drama could be brewing down the road. In the meantime, Caroline (Linsey Godfrey) will finally return. She’ll get updates on everything that’s happened as she lets Thomas (Pierson Fode) reconnect with Douglas.

“The Bold and the Beautiful” rumors hint that Caroline and Thomas could bond again, but will Sasha (Felisha Cooper) cause any problems? We’ll keep you posted as other news emerges. Stay tuned to B&B and don’t forget to check Soap Opera Spy often for the latest “Bold and the Beautiful” spoilers, rumors, updates and news.

‘The Young and the Restless’ Spoilers: Travis’ Admission Stuns Victoria – Abby Doubts Future with Stitch – Another Predicament for Mariah