‘The Bold and the Beautiful’ Spoilers Tuesday June 7: Quinn Gives up on Love, Fears Liam Will Steal Steffy from Wyatt – Ridge Faces Bill and Brooke’s Wrath 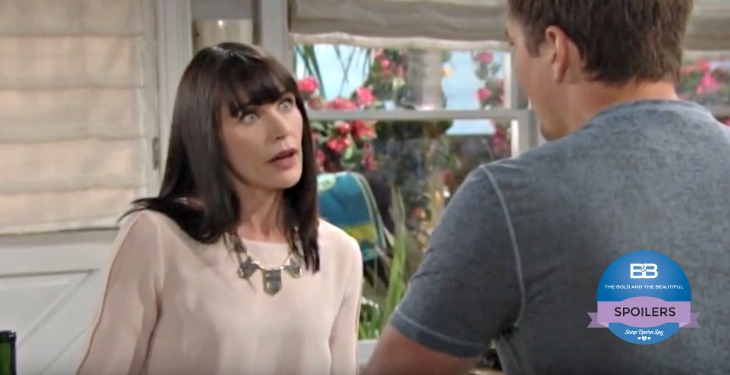 “The Bold and the Beautiful” spoilers for Tuesday, June 7, tease that Quinn (Rena Sofer) will open up to Wyatt (Darin Brooks) about her changing point of view. She’ll realize that she needs to let go of her hope for a future with Liam (Scott Clifton). However, Quinn will suggest that it could spell trouble for Wyatt’s marriage.

Since Liam refuses to rekindle his romance with Quinn, he’ll undoubtedly continue his pursuit of Steffy (Jacqueline MacInnes Wood). Quinn will urge Wyatt to wake up and fight for his wife. She’ll think it’s only a matter of time until Steffy drifts back toward Liam. Wyatt may counter that his relationship is secure, but who is he kidding? Deep down, Wyatt is probably afraid that he’s headed for divorce.

Meanwhile, Katie (Heather Tom) will battle some intense regrets. She’ll ask herself why she ever trusted Bill (Don Diamont). Katie should’ve known that Bill wouldn’t be able to handle keeping a secret like this. She’ll wish she’d kept her mouth shut.

Bill will gripe about Ridge (Thorsten Kaye) and this terrible injustice. “The Bold and the Beautiful” spoilers say Bill will believe Caroline (Linsey Godfrey), Thomas (Pierson Fode) and Douglas have all been adversely affected by Ridge’s decision. He’ll be convinced that Ridge has forced everyone to keep quiet in an effort to protect his own pride.

Later, Brooke (Katherine Kelly Lang) will join Bill at the Forrester mansion. They’ll want Ridge to feel their wrath. Bill and Brooke will insist that Ridge has pushed Caroline to live a lie. Ridge will claim this was a mutual decision. He’ll declare that they had to protect their family from scandal.

Caroline will chime in with her thoughts on the issue. She’ll obviously back up her husband and suggest they did what they had to do. Caroline will beg for Brooke and Bill’s silence, but it looks like that won’t be enough to secure it.

Ridge will have to do some bargaining if he wants to keep all of this out of the media spotlight. Unfortunately, B&B rumors hint that Ridge’s latest plan won’t work out any better than his old ones. Stick with “The Bold and the Beautiful” for updates on the drama to come.

So B&B fans, what do you think about the news that Quinn will throw in the towel on her Liam quest? Will Quinn help Wyatt keep his marriage intact? How will Ridge handle the new threat? Is he quickly losing control of this secret? Voice your opinion in the comments below and don’t forget to check Soap Opera Spy often for the latest “Bold and the Beautiful” spoilers, rumors, updates and news.