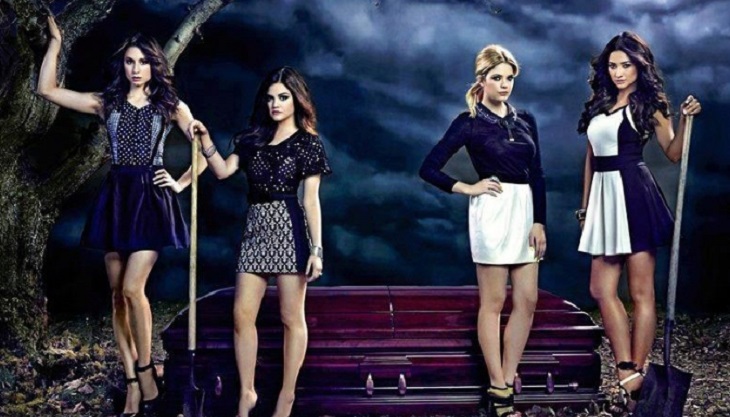 Freeform has announced an all-day marathon of Pretty Little Liars on Tuesday, August 30th, starting at 11 a.m. ET to prepare you for the PLL Season 7 Summer finale airing at 8 p.m. that night.

We know that for the past 6 seasons, Rosewood has been no stranger to death and now it appears that the death toll is on the rise. Season 7 will not be any different. The teaser that has been released is titled “The Darkest Knight” and it has revealed that at least one person dies.

The original “Liars”: Emily Fields (Shay Mitchell), Aria Montgomery (Lucy Hale), Hanna Marin (Ashley Benson), Spencer Hastings (Troian Bellisario), and Alison “Ali” Dilaurentis (Sasha Pieterse) are going to face off with their enemies in a very chaotic fight that ends with a fatality. According to the press release, “One of the Pretty Little Liars learns a secret about her past that changes everything, while another Liar discovers something about her future that could alter her course forever.”

People have died and others have returned from the dead, and none of those returns were bigger news than Ali being alive. Fast forward five years and we see Ali released into the care of Mary Drake. Ali’s brother returns to Rosewood to stop Ali from getting too close to Mary; but the Liars had already discovered something new about Mary, and decide to track down the doctor who delivered Mary’s baby in order to get some answers.

So far that reveals to us that there are TWO secrets, ONE death and more than likely, at LEAST one black hoodie, or red trenchcoat. The past 7 seasons, thusfar, have included repeated mistakes by the Liars and their relationships and family pay the consequences for their actions. They have gone through horror, first with “A” and now with “Uber A”.

On the Season 7 Summer finale, the Liars come closer to finding out the identity of Mary’s second child and a mysterious new development changes Pretty Little Liars forever! How will this revelation change the group and who does it affect the most? Remember that Pretty Little Liars airs on Freeform on Tuesdays at 8 p.m. ET. Check Soap Opera Spy for updates, news and spoilers!