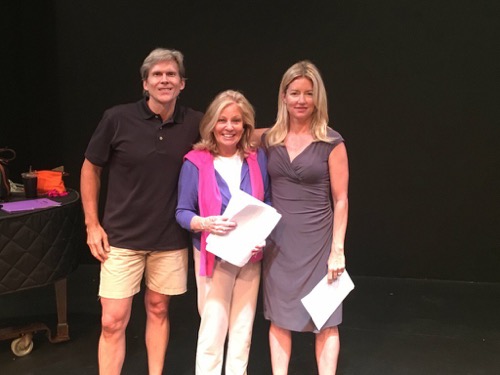 After Grant Aleksander (ex-Philip Spaulding) was spotted around the Days of Our Lives’ set, there had been suggestions that he was joining the show. Gran debunked those rumors a few days later, stating he was on the set to visit some old friends.

There is a new play that was produced by Michael O’Leary (ex-Dr, Frederick “Rick” Bauer) called Breathing Under Dirt. Performances will be happening on August 13, at 2 p.m. and 7 p.m., and August 14, 2016, with only one performance at 2 p.m. at the Ella Fitzgerald Performing Arts Center in Maryland. Besides Guiding Light Alum Grant Aleksander, you will also be seeing Tina Sloan (ex- Lillian Raines) and Cynthia Watros (ex- Annie Dutton). Almost feels like a GL reunion, of sorts.

Breathing Under Dirt, is a play where Michael O’Leary wants to address the subject of forgiveness and reconciliation. He began writing it when his father passed away 15 years ago. Michael started this out as a monologue and chose to enter the first twenty minutes to the 2016 Manhattan Repertory Theatre One Act Play Competition with Beth Chamberlin (ex-Beth Raines Spaulding LeMay Winslow Spaulding Bauer Spaulding) playing the character now played by Cynthia Watros. Grant directed it and it went on to win first place.

After the win and the play gaining lots of attention, they decided to make a full-length version and to perform it in a bigger theater. Michael O’Leary asked Grant if he was interested in directing a full-length play; but not only did he direct, he also played a major role. Tina read the script, said it was brilliant and took the opportunity.

The play is set in the South, during the Korean Conflict. A woman is tormented by the memory of her dead family members, her father and her sister whose bodies are in the garden. Patience and her wheelchair-bound mother have deep resent towards each other, and both are trying to find a way to forgive each other and reconcile their relationship.

Please check Soap Opera Spy often for updates on these actors and actresses, as well as other rumors, news and spoilers!

‘The Young and the Restless’ Spoilers: Summer Shows Luca Pregnancy Test – Nick and Phyllis Team Up – Lily Gets Startling News