‘General Hospital’ Tribute: Patrick Drake and Robin Scorpio – What We Loved About SCRUBS! 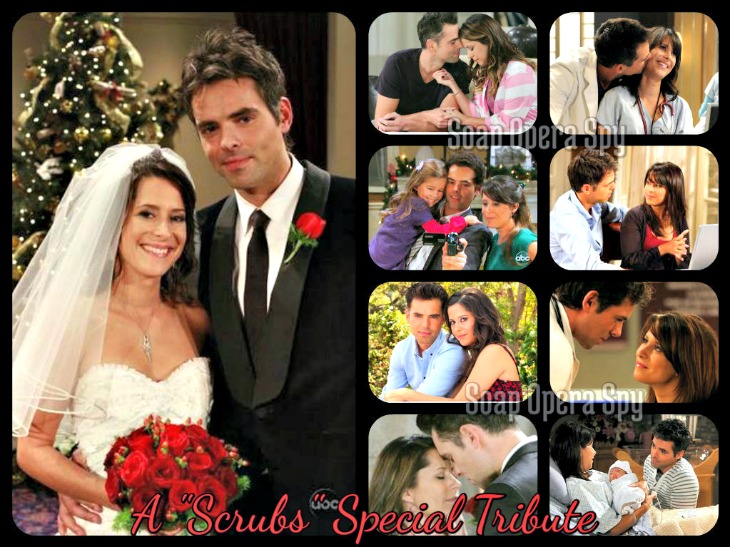 ‘General Hospital’ (GH) fans love Scrubs and there’s no doubt that Robin Scorpio [Kimberly McCullough] and Patrick Drake [Jason Thompson] will be missed. But what is it about the super couple that drew (and kept) a legion of fans devoted to them?

Here’s a tribute to Scrubs to remind us what we loved about the Robin and Patrick pairing.

When we first met Patrick, he was a hotshot young doc scoring with every nurse he could get his hands on, so Robin never took him seriously. They eventually bonded over their daddy issues – his with Noah, hers with Robert – and Robin let Patrick into her bed, but not her heart.

It was a long road to love…

When Patrick realized he was starting to care for Robin, he split with her because childhood tragedy and a distant father had taught him that vulnerability was bad. But a medical scare finally gave Patrick some perspective and he realized he wanted to love Robin – and she loved him back.

And that long road was chock full of speedbumps!

It seemed like every time they took a step forward as a couple, one of them sabotaged their relationship and pulled back – like when Patrick ran off to Vegas then refused to confront his fears related to his HIV scare but they always found their way back to each other.

That’s the phrase Patrick used to describe how he felt about Robin when he thought he might lose her due to a gunshot wound. But even that extreme love couldn’t keep them together because Patrick and Robin were fundamentally different at that point in their lives.

Babies on the brain.

A major turning point in the Scrubs relationship was when Robin decided she wanted a baby and Patrick decided that was the last thing he wanted. But after much back and forth, Robin got the baby she wanted and Patrick finally committed to being a family man.

With Robin carrying his child, Patrick was finally ready to settle down but Robin refused the proposal again and again but then finally agreed to marry him while she was heavily pregnant with Emma Drake [Brooklyn Rae Silzer].

A couple of weddings…

Robin’s labor and delivery put an end to their first attempt to get married but their second wedding, around Christmas, went off beautifully and we thought they finally got their happily ever after. Patrick stepped up in a big way during Robin’s postpartum depression and embraced life as a dad.

Loss and life as a single dad.

Despite some marital hiccups, Patrick was deeply in love with Robin and she with him but her fiery death ended them and crushed Patrick’s spirit. After that, he dedicated himself wholly to being the best father he could to little Emma and that was enough for him – for a while.

While Robin was assumed dead, Patrick fell for Sabrina Santiago [Teresa Castillo] but he chose Robin over his new nurse when she came back. Then Patrick later found love with Sam Morgan [Kelly Monaco] when Robin ran off again but he chose Robin once more upon her return.

The happy ending at last!

With Robin in and out and Patrick’s other romances, it seemed like Scrubs was doomed, but then we finally got our happy ending when Patrick found Robin alive and well and was shocked that he had let her languish as a prisoner while he assumed she didn’t want a life with him.

A bittersweet farewell for Scrubs fans…

Their third wedding was intimate and centered on Emma – this cemented the three of them as a family unit and Scrubs as a forever couple. When Patrick, Robin and Emma skipped out of Port Charles hand in hand, it was bittersweet for Scrubs fans.

We know they’ll be together, and that’s what GH fans want for these characters they’ve watched love and lose each other so many times over the years, but we also know we won’t get to see their happily ever after play out since it will be off-screen and not in Port Charles.

So many character exits have been lackluster (Luke, for instance) but GH showrunners did justice to the Scrubs super couple and gave GH fans an ending they could enjoy even if it was a hasty yet happy close to the long-running Scrubs storyline.

We hope you enjoyed our Scrubs tribute – share your comments below on your favorite moment of Patrick and Robin’s relationship and check back with Soap Opera Spy often for more ‘General Hospital’ spoilers, news and polls.

‘The Bold and the Beautiful’ Spoilers: Deacon Helps Quinn Quiet Liam’s Suspicions – Wyatt Wonders If He Should Take Liam’s Job

‘The Young and the Restless’ Spoilers Thursday March 3: Jack Worries About Going to Prison – Kevin and Luca Clash – Hilary and Ashley’s Showdown