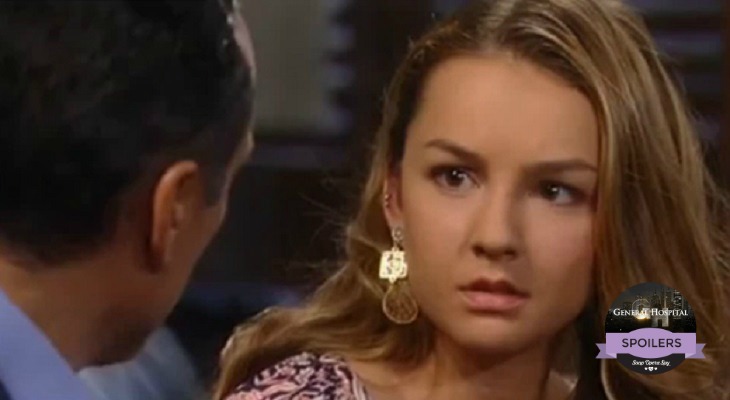 ‘General Hospital’ (GH) spoilers for Wednesday, March 16 reveal that Crimson is in trouble again – and we now know who’s to blame. Franco and Liz’s growing relationship becomes an issue and Kristina is called on the carpet by her parents. Here’s what to expect on tomorrow’s GH episode.

This issue is key to the case against Mayor Lomax [Shari Belafonte] that Alexis Davis [Nancy Lee Grahn] is pursuing for Olivia. But we now know that Julian Jerome [William deVry] sabotaged the issue – as he did Crimson’s green issue. What a cad!

Related: What Does The Key That Laura Received At Helena’s Will Reading Really Mean?

Maxie and Dillon Quartermaine [Robert P Watkins] are horrified by what they see with the new issue. What can it be? It can’t be green again since Julian saw Nina Clay [Michelle Stafford] was able to turn that around. What did he do?

Nina has a busy day of issues to deal with. She goes to see Franco [Roger Howarth] at GH and wants to know why he took off to Philly to see Liz Webber [Rebecca Herbst] without telling her that he was going. Franco may think that Nina is jealous of Liz.

Nina may be, but that’s not the real issue. When Franco defends his actions and tells her he went to see Jake Spencer [James Nigbor], that’s when Nina gets more upset. Turns out she’s angry that he’s hanging out with other women’s kids but doesn’t want to have one with her.

Speaking of Franco and Liz, Epiphany pulls Liz aside and asks what’s going on between her and Franco. Liz, of course, is friends with Franco and no doubt wants to show him that disturbing journal that Helena Cassadine [Constance Towers] willed to her, but that’s all it is – just friends.

Despite Liz’s assurances, Epiphany will warn Liz not to get too close to Franco. How will Liz react? In fact, Liz needs all the friends she can get and Franco is a decent guy. He brought her kid a bike, Jake likes him, and he even stood up for her with Jason Morgan [Billy Miller].

Back at the Crimson office, Nina sees the new Crimson mess and begins to conclude these are not printer “accidents” but someone deliberately trying to tank the magazine. No worries, Nina will turn this around again and shock Julian by her unexpected success.

Alexis corners Molly Lansing [Haley Pullos] to ask what’s going on with Kristina Corinthos [Lexi Ainsworth]. Looks like the tuition check came back uncashed and Alexis is very suspicious. Sonny Corinthos [Maurice Benard] also has questions and takes them directly to Kristina. What will she say?

Sam Morgan [Kelly Monaco] and Jason play around – are they checking out his new place? Sam surprises Jason when she says she wants to slow things down until he figures out what he wants from his new life. They will come up with an interesting idea on how to proceed with their relationship.

What do you think GH fans? Excited to see all this play out? Watch the Wednesday, March 16 GH and then come back to Soap Opera Spy for more ‘General Hospital’ spoilers and news.