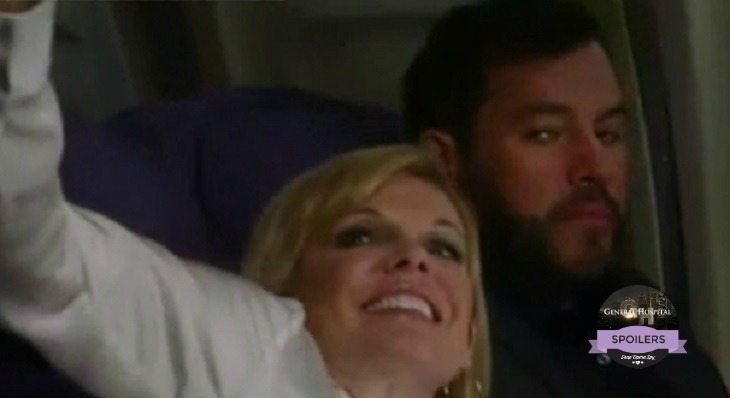 ‘General Hospital’ (GH) spoilers for Tuesday, June 14 tease that Nathan thinks he’s got the goods to take down Julian. Things get tense at the PCPD and there’s lots of action on an airplane headed out of town including a new character debut.

Nathan West [Ryan Paevey] is thrilled to have found the Cassadine dagger – not that it was hidden – and crows that he thinks it’s the murder weapon. GH spoilers reveal the cops will rush it back to the PCPD to get it tested for evidence.

Also at the PCPD, Jordan Ashford [Vinessa Antoine] tells Anna Devane [Finola Hughes] that she can’t work on a certain case. Is it the Carlos Rivera [Jeffrey Vincent Parise] case? Anna won’t be happy if Jordan bars her from it.

Related: Which Of Alexis’ Daughters Is Your Favorite? VOTE!

Also, Dr Andre Maddox [Anthony Montgomery] tells someone, either Jordan or Anna, that he can’t take their side. Spoilers hint that Jordan is still jealous of Anna and Andre’s relationship and will accuse Andre of having feelings for Anna beyond friendship.

The knock on the door at the safe house is not the cops, but is a care package from Sonny Corinthos [Maurice Benard] for Jason Morgan [Billy Miller] and Sam Morgan [Kelly Monaco]. Looks like Sonny wants to help the duo clear Jason’s name.

They don’t have to look too far for Nikolas Cassadine [Tyler Christopher]. Turns out he’s still in Port Charles on a plane in first class next to Ava Jerome [Maura West]. Also there is Huxley [Trent Dawson] who recognizes Ava, Nikolas – or both of them.

What will Nikolas say to Ava to explain his presence and keep her from letting people know he’s alive and well? Which one of them does Huxley know and who is the mysterious Brit? GH spoilers reveal Ava is off on a new adventure – will it include both Huxley and Nikolas?

Related: 5 Couples We Want Back Together On ‘GH!’

What do you think GH fans? Is there another explosion coming between Julian and Alexis over the dagger? What will Carly Corinthos [Laura Wright] have to say about what the cops found in the Jerome house? She must be pleased as punch!

Share your comments below on the spoilers for the Tuesday, June 14 GH and tune in to Soap Opera Spy every day for more ‘General Hospital’ spoilers and news.

‘The Young And The Restless’ News: Greg Rikaart Announces Birth Of His Baby Boy Montgomery

General Hospital Spoilers: Is Valentin Right In Thinking He Has Another Shot With…