‘General Hospital’ Spoilers: Tracy Faces Off With Sabrina In Battle For Baby “Edward” 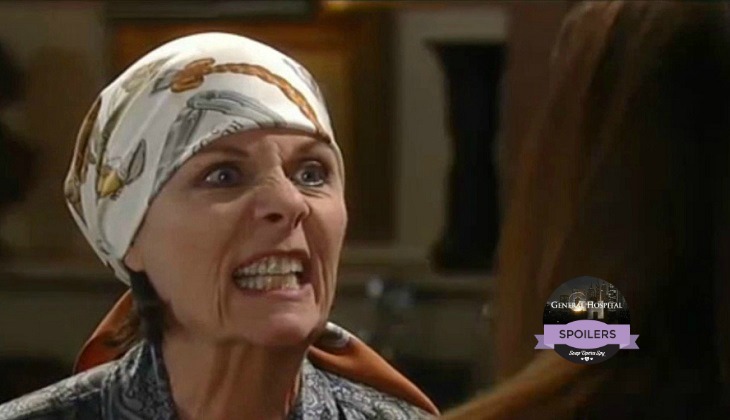 ‘General Hospital’ (GH) spoilers tease that Tracy Quartermaine [Jane Elliot] won’t give up baby “Edward” without a fight. Tracy has bonded with the little guy and sees him as hers – looks like those brain worms may have addled her – or perhaps her death scare changed her outlook.

No matter what’s driving Tracy’s behavior, she’s not happy to see Sabrina Santiago [Teresa Castillo] return. Before Sabrina left, she and Tracy were on very friendly terms but it looks like those happy days are over and the gloves are off.

Tracy makes inflammatory accusations about Sabrina and impugns her choices since she became a mother. Tracy makes some pretty salient points. Sabrina was dumb to run off with Carlos Rivera [Jeffrey Vincent Parise] knowing what he’d done.

Sabrina put her son at risk by carting him around while she was on the lam and then dumping him with her aunt who then dumped the adorable little guy on Tracy’s doorstep. Tracy believes she’s duty-bound to protect little Edward.

In fact, Tracy has such a dim outlook on Sabrina as a parent that she doesn’t even want to let her hold the baby. Right now, Tracy is holding all the cards. She is Edward’s legal guardian and Sabrina still has to face charges for turning fugitive with Carlos.

Plus, the baby being left on the Q doorstep could be construed as abandonment. It looks like it may be an uphill climb for Sabrina to stay out of jail and get her son out of Tracy’s obsessed clutches. But Tracy feels like she’s in the right and Edward deserves a better parent.

This won’t sit well with the other Qs, though, who will surely line up behind Michael Quartermaine [Chad Duell] who is clearly on Team Sabrina. Dillon Quartermaine [Robert Palmer Watkins] likes seeing his mom happy with the baby, but likely won’t think she should keep him from Sabrina.

And Ned Ashton [Wally Kurth] will no doubt also weigh in on his mother’s actions. Will Sabrina have to take Tracy to court or can she find a way to convince her son’s guardian that she deserves a second chance? How far will Tracy take the battle for the baby?

What do you think GH fans? Is Tracy a better mom since Sabrina put her son at risk with her fugitive antics? Or should Tracy get a grip and hand back the kid ASAP? Share your comments below and tune in to Soap Opera Spy every day for more ‘General Hospital’ spoilers, news and more.

‘The Bold and the Beautiful’ Spoilers: Thomas’ Dilemma – Will He Choose Forrester Creations Shanghai Or Claim Douglas As His Son