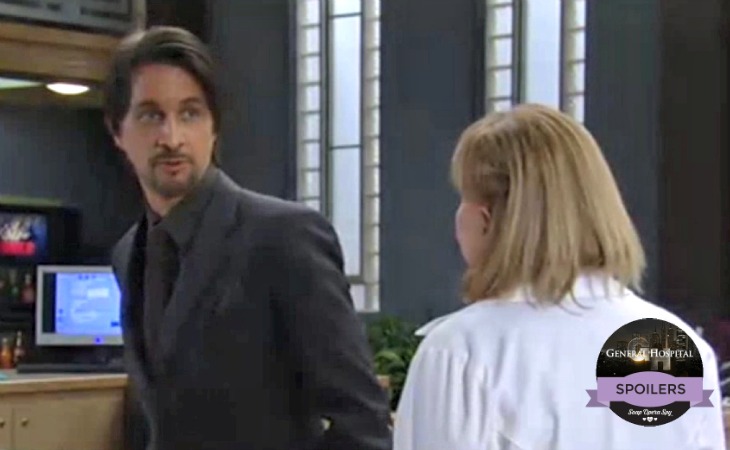 ‘General Hospital’ (GH) spoilers for Thursday, April 28 reveal that Michael and Sonny have a war of words, Maxie presses Nathan about his ex-wife, Monica and Tracy take on Obrecht, and much more. Here’s what to expect on tomorrow’s episode of GH.

Michael Quartermaine [Chad Duell] is back from Puerto Rico with no luck finding Sabrina Santiago [Teresa Castillo]. Michael wants to talk to Carlos Rivera [Jeffrey Vincent Parise] about where Sabrina is and whether she’s safe.

You Might Also Like —> Brooklyn Rae Silzer Celebrates Tenth Birthday and ‘Criminal Minds: Beyond Borders’ Appearance Before Nurses Ball

Maxie Jones [Kirsten Storms] quizzes Nathan West [Ryan Paevey] about his ex Claudette. She wants to know if he’s been 100% honest with her. Nathan reassures Maxie but that’s not enough. She’ll soon turn to Sam Morgan [Kelly Monaco] for help.

Franco [Roger Howarth] comes home and Nina Clay [Michelle Stafford] wants to know where he’s been. She thought he left The Rib because of her but that was about Jason Morgan [Billy Miller]. He wasn’t the one following Sam and Jason, was he?

Jason and Sam linger at the stables and it looks like they will figure out that someone was definitely peeping at them and they are disturbed by a discovery. Alexis Davis [Nancy Lee Grahn] has to tell Carlos about the witness while Julian Jerome [William deVry] schemes to make that problem go away.

Alexis will soon realize that Julian is neck deep in the mob mess again and her first sign may be the violent end that the “witness” to Carlos shooting Duke Lavery [Ian Buchanan] meets very soon. Looks like Hammer will take care of the problem on Julian’s orders.

This opens things up for Alexis to once again press for a dismissal of the case against Carlos since the witness not being available ties things up nicely. Remember Hale never got the chance to make a formal deposition so it’s only Jordan Ashford’s [Vinessa Antoine] word and that’s not enough.

Don’t miss any of the Thursday, April 28 episode of GH and tune in to Soap Opera Spy often for more ‘General Hospital’ spoilers, news and more.