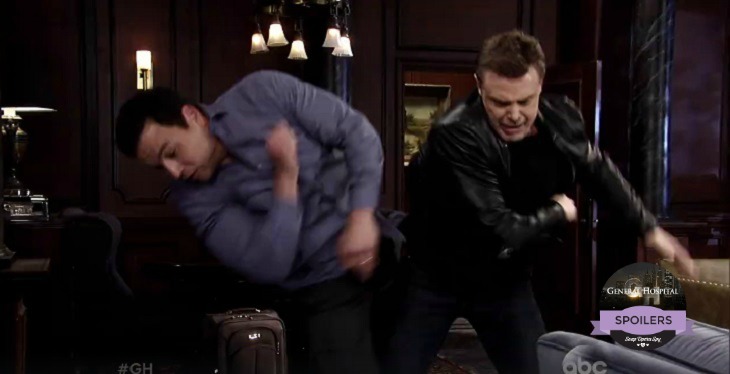 The latest ‘General Hospital’ promo teases that this week will be an explosive one. The voice over for the promo teases “Ready or not, this Spring, changes everything”. Several storylines are heating up and there will be many ‘not to miss’ moments happening this week.

Fans need to gear up for some intriguing stories, couples will be sharing romantic moments, there will be fights and some form of bloodshed. In the promo we can see Ava (Maura West) gleamed with fear as she relates to someone on the phone that she just received another threat. Later Ava is shown screaming out as it looks like she discovers someone in blood or is she the one with blood. While we can see Sonny (Maurice Benard) loading a gun, is he about to shoot someone?

For the couples, some intense kissing is happening in the short clip posted by the General Hospital Facebook page. Nathan (Ryan Paevey) and Maxie (Kirsten Storms), Sam (Kelly Monaco) and Jason (Billy Miller), Franco (Roger Howarth) and Nina (Michelle Stafford) and Dante (Dominic Zamprogna) and Lulu (Emme Rylan) are all seen making out. While these couples are sharing some happy moments it looks like Kristina (Lexi Ainsworth) and Parker (Ashley Jones) are having a difficult time –  we can see Kristina shedding some tears.

Things look pretty intense though for Nikolas (Tyler Christopher) and Curtis (Donnell Turner), who are both on the receiving end of Jason’s fist. The question is why is Jason punching these two guys, did he find out something about them? Later Jason is seen making Sonny an offer he can’t refuse. Is Jason ready to become Sonny’s right-hand man another time?

Related: Who Will Win The 2016 Emmy For Outstanding Supporting Actor? VOTE!

So GH fans, from the looks of things are you intrigued with the upcoming events for this week? Who do you think will get shot?

Ready or not…This week on #GH.