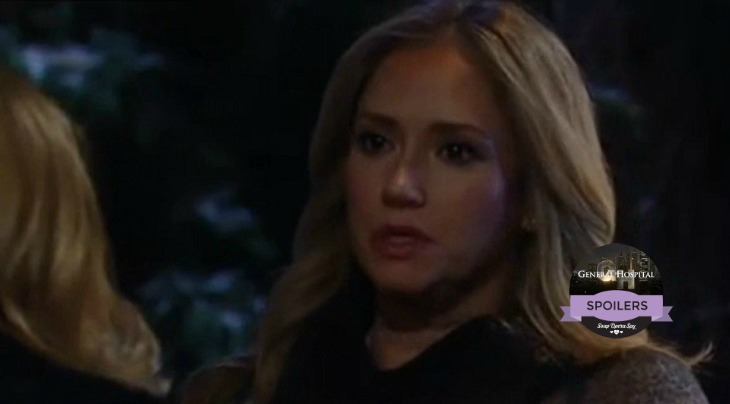 ‘General Hospital’ (GH) spoilers for Monday, February 1 hint that Kristina’s mess is boiling over, Sam is in danger with no one to help, and Lulu is optimistic about her marriage. Check out these juicy spoilers for the next episode of GH.

It’s a shocker that Professor Parker who’s in a plot with Kristina Corinthos [Lexi Ainsworth] is a woman. Parker tells her to stop what she’s doing and that she knows what she’s been up to. Is this the wife of someone Kristina propositioned?

Or did Kristina offer a sex for grades swap to a lady prof? Is Kristina gay? More to come on this as Kristina finally unloads the whole sordid story on her sister Molly Lansing [Haley Pullos] in desperation. Looks like Kristina is NOT leaving Port Charles after all…

Related: Hayley Erin’s New and Improved Kiki Jerome – How She Made Fans Love Her

Sam Morgan [Kelly Monaco] is lying at the bottom of the basement stairs at the Webber house. Jake Spencer [James Nigbor] didn’t know she would fall and is shocked. He looks her over and may think she’s dead. Jake is scared and leaves her there.

Meanwhile, Jason Morgan [Billy Miller] and Liz Webber [Rebecca Herbst] continue their talk with Franco [Roger Howarth] about Jake. Franco says at least now they know their son needs help and can get him what he needs. None of them know it’s too late.

Jason and Liz have a serious talk then head home with no idea that Sam is lying injured downstairs. How long will she languish before someone comes to her rescue? Intrepid Sam will try and rescue herself but GH spoilers indicate she will make things worse on herself.

Nina Clay [Michelle Stafford] is in love with Olivia Falconeri’s [Lisa LoCicero] social stance on public nursing. Julian Jerome [William deVry] is with her and Nina tells Olivia her great idea for Crimson that has to do with Olivia and her cause.

Will Nina suggest Olivia should be her new Crimson cover girl with baby Leo latched on? Whatever Nina suggests makes Julian very uncomfortable but he probably won’t tell her “no” since he wants her to bankrupt the magazine, so we’ll see…

Dante Falconeri [Dominic Zamprogna] is surprised by the seduction scene that Lulu Falconeri [Emme Rylan] has set up for him. While it won’t go quite the way she planned, Dante and Lulu will come to an understanding about the future.

Too bad Dante will still be attracted to Valerie Spencer [Brytni Sarpi] as we’ll soon see when he has a jealous fit as Val moves on from him and his mess of a life. Don’t miss a moment of the Monday, February 1 GH and come back to Soap Opera Spy every day for more ‘General Hospital’ spoilers.

‘The Bold And The Beautiful’ Spoilers Monday February 1: Quinn Pressures Wyatt To Seal The Deal With Steffy, Thomas Skeptical Of Sister’s New Romance