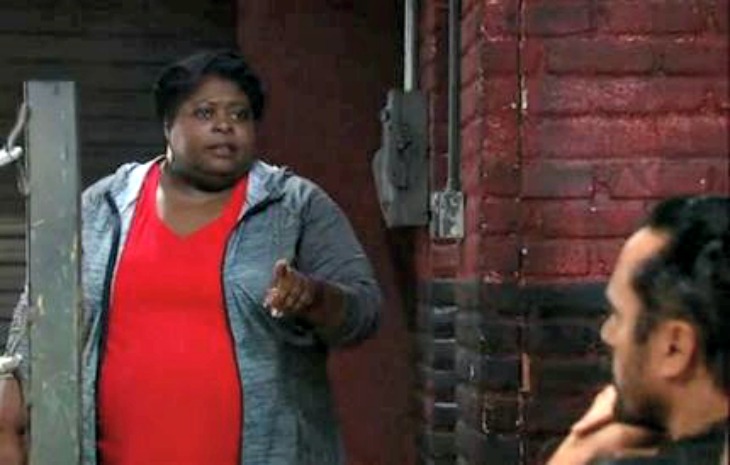 ‘General Hospital’ spoilers tease that Epiphany Johnson [Sonya Eddy] might be the one who is able to help Sonny Corinthos [Maurice Benard] deal with the serious problems the mobster is facing as his life seemingly falls apart before him.

Jason Morgan [Billy Miller] may have discovered concrete clues to the identity of the bomber responsible for the explosion that may have claimed Morgan Corinthos’ [Bryan Craig] life. Carly is absolutely convinced that Sonny will exact revenge despite her warnings that he must change or she will leave him.

Who can help Sonny change? Epiphany has helped Sonny once before. ‘GH’ fans remember that when Sonny was shot and confined to a wheelchair Epiphany came to his rescue. It’s rare that Sonny is intimidated by anyone, but Epiphany managed to force Sonny to take stock of his life and learn to walk again.

Related: Maurice Benard Teases New Role – Working On Acting Projects On The Side

Sonya Eddy recently spoke with ABC Soaps in Depth and revealed that she’d love to come back to ‘GH’ and set Sonny straight again. “[Epiphany] talked to [Sonny] like he talks to [Michael and Morgan]. There was no emotional baggage, no entanglements.”

Is it possible that the ‘General Hospital’ spoilers could be correct? Is the only person that can reach Sonny, just as she did before, Epiphany? Sonya Eddy would certainly like to give it a shot.

Related: Does Jax Want Carly Back – Which Man Will She Choose? VOTE!

Having Epiphany back in Port Charles would be a plus for ‘General Hospital’ viewers. The actress has been busy during her time away. Sonya has filmed 16 episodes of the television series ‘Those Who Can’t.’
That’s not the only project the actress has been working on. Sonya appeared in the movie ‘Pee-wee’s big Holiday,’ and guest-starred on the television series’ ‘Crazy Ex-Girlfriend,’ ‘Adam Ruins Everything’ and ‘Fountain of Youth.’

‘Days of Our Lives’ Spoilers: Abby Begs Jennifer To Keep Return Secret – Chad And Gabi Make Decision About The Future

‘The Young and the Restless’ Spoilers: Sharon Deserves Understanding – Her Attackers Living In Glass Houses