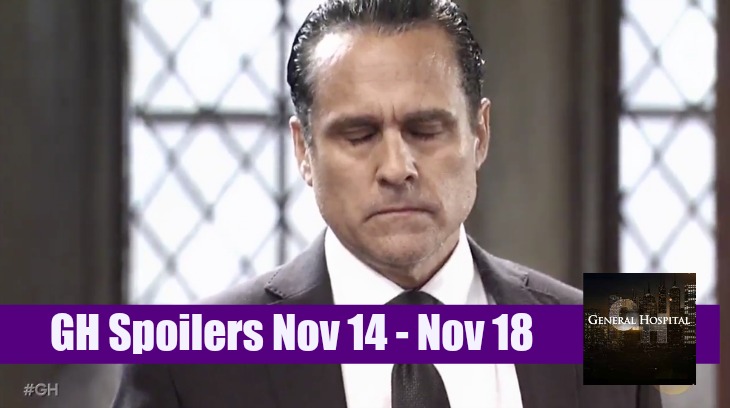 General Hospital (GH) spoilers reveal that at Morgan Corinthos’ (Bryan Craig) funeral, his father, Sonny (Maurice Benard) pulls out a gun and confesses to everyone that he is responsible for Morgan’s death. Jason Morgan (Billy Miller), Sonny’s former mob enforcer, comforts him and after convincing him this isn’t the way to do things.

Jason informs him about the new developments, Max Giambetti (Derk Cheetwood) and him have discovered after finding the elusive broker Sonny had hired. They tell Sonny he is 100% innocent when it comes to Morgan’s tragic death, that the planted bomb was not done by him. This news bonds Jason and Sonny again.

Related: Where in the World is Port Charles’ Lucas Jones?

Jason shares the news with Carly and gives her advice on how to handle things and Sonny, but Carly is still very angry and distraught. She is faced with conflicted emotions, and we all know how Carly is when she doesn’t know how to express how she feels or how to deal with them. With new proof, Jason and his wife Samantha Morgan (Kelly Monaco) continue to investigate who planted the bomb and this week they will follow-up on another lead.

GH’s Elizabeth Webber (Rebecca Herbst) was faced this past week with some scary news, when she learned that not only was Tom Baker (Don Harvey), the man who raped her in 1998 was eligible for parole, he’s been released into the care of his brother who happens to live in Port Charles.

Her fears and anxiety of Tom’s release are put on the back burner when she is called to help save and care for her sister, Hayden Barnes (Rebecca Budig). Will the sisters finally find a common ground and bond?

Franco Baldwin (Roger Howarth) assured her he would do anything to keep her safe, and he meant it. Sources shows that Liz will find out exactly what Franco’s intentions are. After Liz receives a scary and creepy surprise, Franco goes against her request to keep her safe, just like Jason did years earlier.

General Hospital’s Jasper “Jax” Jacks (Ingo Rademacher) initially arrived in Port Charles to help his daughter, Josslyn (Eden McCoy) and his ex-wife Carly get through Morgan’s funeral, and help them cope with their loss; but they aren’t the only ones he helps.

His beloved friend, Alexis Davis (Nancy Lee Grahn) seems to be in dire straits herself. Jax goes visit her and they come to an agreement, where Alexis finally feels a little hope again. What do you think the agreement is and does it have anything to do with Julian Jerome (William DeVry)?

Be sure to tune into ABC’s General Hospital for the week of Monday, November 14 to Friday, November 18, 2016, to catch up on all these stories and more. Check Soap Opera Spy for updates, news, rumors and spoilers!

‘The Young and The Restless’ Spoilers: Cane Going Against Doctors Orders – Prepares To Battle Billy